NEW INFO STATED SO FAR: (Not posted on Tezukainenglish)


April 1966 - Chiitan (Ti-Tan) Part 1
May 1966 - Chiitan (Ti-Tan) Part 2
(Technically documented but is split into two parts/ not posted on Tezukainenglish)
I have a theory about this chapter as to why it wasn't given an English release. The chapter has racist/goofy depictions of black people and are seen as one of the antagonists of the chapter. I'll give an example (When I get to scanning the second part)

. My theory is the same reason why Jungle Emperor Leo (Kimba the White Lion) manga wasn't also released in English.

ASTROBUDDY wrote:BTW do you have any of the issues from 7/66 to 11/66 and do they also feature Atom episodes? Inquiring minds want to know!

For ASTROBUDDY's question: While I don't have any issues past July 1966, I do know by my research that I can verify that the covers on August-October say that they come with Astro boy chapters. The text (under the title) mentions Astro Boy having a chapter in this issue.
Here's where I've found that information: http://web2.nazca.co.jp/0107hop/atomcul ... ubtop.html

September 1966 - Cover has Kimba the White Lion on it, but it says on the cover that it contains a manga chapter for astro boy as well.

1st page of comic (Sept. 1966) Does this chapter look familiar to anyone?
This is the only issue I've found with picture verification of the actual comic page.

The scene appears to be from an anime episode titled, "Cobalt goes Crazy" (episode # 182--Kurutta Kobaruto) (also known as "Demented Cobalt") The episode first aired in Japan on Sept. 24, 1966. (One of 89 not dubbed into English.)

Yes I have noticed that the the 1966 covers show that they each feature an Astro boy manga. Great research. Kudos, BrutalDawnfawn!

BrutalDawnFawn, according to that link you provided about the Astro Boy Club issues from 1966, the same artist, Satoru Inoue is listed as drawing the Astro Boy manga for both the August & September 1966 issues. So if I am right about the episode being featured then we can make an educated quess that maybe the episodes in those issues is the episode in question divided among the two issues. Also while the cover of the last issue does not say there is an Astro Boy manga in it the information from the link you provided states that there is an Astro Boy manga in that issue. Just taking an educated guess. Maybe Jeffbert can corroborate my guess re: the manga in the Sept.1966 issue.--Astrobuddy;

hm.. I tried to see where I could edit my post but can't seem to find it. I'll just make this new one.

This was what I was talking about in the chi-tan chapter:

ASTROBUDDY wrote:The scene appears to be from an anime episode titled, "Cobalt goes Crazy" (episode # 182--Kurutta Kobaruto) (also known as "Demented Cobalt") The episode first aired in Japan on Sept. 24, 1966. (One of 89 not dubbed into English.)
Yes I have noticed that the the 1966 covers show that they each feature an Astro boy manga. Great research. Kudos, BrutalDawnfawn!

Oh, I've never seen that one

I'll have to check the episode out! I'm guessing this manga version wasn't documented before either as tezukainenglish doesn't say anything about it.

As for October and November 1965, I don't have unfortunately

I can't confirm for sure that they don't have comics in them.
I think they're still in stock on mandarake though. but they don't show any pictures that might suggest that they do have chapters.

For the September - October

I've got 8/66 coming in the mail (That'll make me have 2/66 and 4/66-8/66 all-together). http://web2.nazca.co.jp/0107hop/atomculb/08/atomclub08.html also says that there's something astro boy related in there. (Probably a comic chapter by Satoru Inoue based on what the front says, but will know for sure later on)
I would say that it's a good educated guess Satoru Inoue's two contributions to the Mighty Atom Club Magazine are a chapter split into two parts. I'll get August soon through DHL and i'll give you guys the answer

-October '66 Satoshi Inoue
-November '66 Yutaka Ohno
Here are the authors for those issues. Probably guessing that those are two separate chapters as well.
Top

Just curious from which installment was this panel taken from? --Astrobuddy

JUST RECEIVED 1966/06, & IT HAS A PAGE ABOUT THE ROBOT SCHOOL, TEACHERS & STUDENTS. Already finished copying/translating everything on that page except the left margin. It has names and descriptions for about 6 students, images of 4. There is a school song! My google translation probably lacks somewhat for quality. But, here it is:

I think it was already stated that this volume has robot fortress in it. Not that the one little robot's embarrassing location for his refueling port is not in this version!

Lala can Emit fluorescent gas from the chest. I had no idea it was fluorescent!

pg 66 seems to be fan mail. 1st item is this girl loves Chitan.

Just noticed on the rear cover colored square with numbers of issue since beginning of publication.

It seems that traditional comic issues aren't big business in Japan judging by all long they last versus traditional manga serialized books and trade collections, which are the norm.
Badre El Amir Bally
Top

From Dark Horse release: Vol. 17, Ch. 53 - Face in the Rock/ Little added introduction on the magazine and its history.

There's A LOT contained in these fascinating things!

I'll share more about what's specifically contained in the issues that I have (in issues that haven't been covered in the other sources (http://web2.nazca.co.jp/0107hop/atomculb/atomclubtop.html)).

Face in the Rock has been re-released and officially translated. But when I opened my February '66 issue, the 2nd and 3rd pages were in color. Not sure if color versions of this chapter were released, but here they are:

ASTROBUDDY wrote:Just curious from which installment was this panel taken from?

This panel is from the 10th panel (2nd page) May 1966.
Some crooks steal Chi-tan and sell him to these people. Don't sure what the reason why is. I'm still commissioning the translation for this part.

I do have to wonder why this story is relatively different than its anime counterpart. Was NBC enterprises involved in the production of Astro Boy's anime as it was with Jungle Emperor (Kimba the White Lion)?"
Also, Chi-tan is such a strong fellow

He can take down a herd of elephants all by himself! 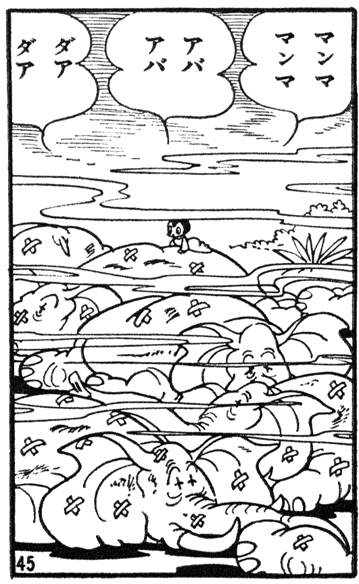 I've got a rhetorical question: Why did Dr. Ochanomizu make Chi-tan in the first place? Besides being a gift to Astro, Uran and their parents, what use could a baby robot have if he acts like a normal baby and causes trouble and stress for everyone and robot around him? I'll admit, I think he's still adorable

Thanks for the translation of the extra other content in the magazine issue.
Oh, That little embarrassing refueling port location! I think I remember seeing that in the first 60s Astro episode if I remember correctly

It's not embarrassing here.
The side margins from the "robot fortress" (Part 1) June 1966, I've got translated (via commission)
Here's the link again for the first 3 pages for reference: https://mega.nz/folder/gH4E1IpI#O25fOHjuhvksaCQ9aAhluA
Side Margins: page 1: " A small fight amongst the children has finally led to a huge war of humans versus robots... What will Atom do?!"
Page 3: "Special "World of Mushi Pro." starts on page 23. Read up and get strong with Mushi Pro.!"
cont. w/o pictures - Page 5 - "Join the Mushi Pro. Friend Association to get "Mighty Atom Club" and other special goodies."
Page 7: Apply for Mushi Pro Friend Association - Send fare for 6-month subscription of 300 yen to the following address:
Tokyo Ikebukuro Higashi 2 Chome 2 Ban Yokoda Building, Mushi Pro Friend Association Application"
Page 9: "Apply for an amazing cadnica radio from Mushi Pro Star Quiz! See page 62"
Page 10: "Atom's in trouble! How will the fight between humans and robots end...?!"
Translated by this person: http://splash.pmsinfirm.org/commissions_tl.htm

BBally wrote:It seems that traditional comic issues aren't big business in Japan judging by all long they last versus traditional manga serialized books and trade collections, which are the norm.

Good point. with buying serialized manga issues, one doesn't have to subscribe to a magazine to get new chapters. They can just buy them individually. Since this magazine only lasted a little over two years, the market could've been compromised of hard-core Tezuka fans.

Was this entire magazine re-printed in 2009? I found this on amazon.co.jp: https://www.amazon.co.jp/exec/obidos/ASIN/4862354939/osamutezukdic-22. According to http://phoenix.to/64/64-1.html, Jungle Makai/ Jungle Devil Boundary was re-printed here. I found it before ordering the originals on mandarake. But I couldn't tell if this is a re-print of the magazine and/or with other astro boy stories mixed in together. The price tag's a little much for me to find out what's actually in there

I've got a rhetorical question: Why did Dr. Ochanomizu make Chi-tan in the first place?

According to the Anime, Chi-tan was made for a royal couple that couldn't have their own children. He was one of several robots made for a contest, and the couple would pick the 'winner'. For some reason, Chi-Tan wasn't adopted by the royals, and Astro's family ended up with him, mostly because Uran fell in love with the baby robot, and wanted him for her little brother.
[sigpic][/sigpic]