No!The only issues I own are the November, 1964 issue and the March and May, 1965 issues plus the first issue of Mushi Pro Mini-Manga which featured reprints of manga from the "Mighty Atom Club" magazine in full color. This particular issue features a reprint of all three chapters of "Earth Defense Squadron/The Moon Monsters" manga reduced in size to 2" X 3".-Astrobuddy

BTW
Have you seen these?: 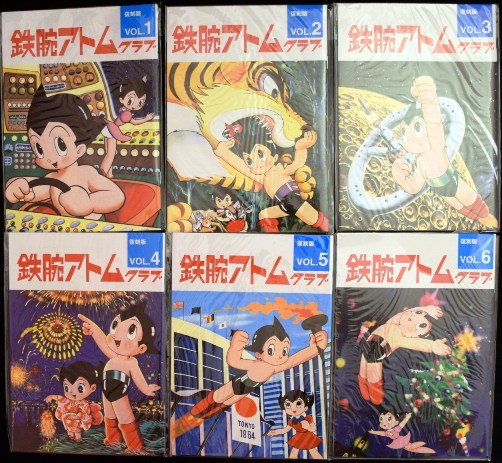 I believe these contain "Mighty Atom Club" manga reprints. I believe they were put out by the same company that put out the 7 box set that reprinted the original Atom manga as published by Kobunsha.. I have been unable to find much more about them other than these images where they were sold with a complete set of all seven Mighty Atom original manga collection as published By Kobunsha.--Astrobuddy.
I

As for the 11/66 November issue, That's the only pic I've found, which was the ending. it was from a twitter post. Maybe it something completely new? Or non-translated episode?

OH, I've stumbled across some of those! I can't find the entire magazine line, just a few early issues. They sometimes appear on YahooJapan Auctions. Using past auction searches were a good way for me to find inside pictures of some of these.

Some of the exclusive things you could buy through their service were nice.
Like this postcard 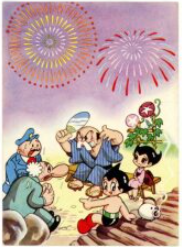 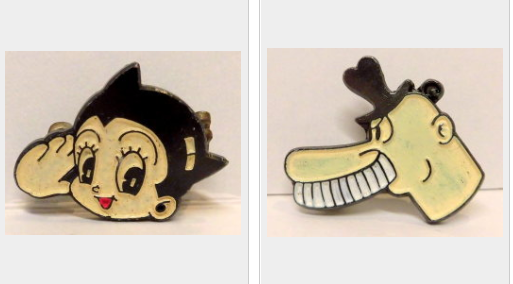 I wish I was alive then haha.
Top

Hi, BrutalDawnFawn! I guess you missed the previous post where Jeffbert confirmed for me that issues 10/65 & 11/65 featured a two part adaptation of the anime episode, "The Boy from Outer Space/The Mighty Mite from Ursa Minor!"

Yes the 11/65 episode may be a heretofore not known Atom manga story. It is possible that its exclusion from any lists is because it was done by one of Tezuka's assistants and not Tezuka himself Only time will tell!--Astrobuddy

Whoops, apologies on that. I'm glad that we're discovering all this that hasn't been covered in the English-speaking fanbase.
Another one discovered! Planning on watching that one now.

It makes me wonder where Tezuka-in-English got its information from to think that some atom magazine issues didn't have chapters. Maybe they didn't want to re-release these for one reason or another and pretended they didn't exist? Maybe Tezuka changed his mind? Oh well, we may never know.
Top

If you go to the current https://tezukaosamu.net/jp/manga/?c=120 site, there are previews of many of the comics, as many as 49 pages free to view.

BrutalDawnFawn asked:It makes me wonder where Tezuka-in-English got its information from to think that some atom magazine issues didn't have chapters. Maybe they didn't want to re-release these for one reason or another and pretended they didn't exist? Maybe Tezuka changed his mind? Oh well, we may never know.

I believe what may have happened when they were researching the "Mighty Atom Club" magazine using the only sources available for the Mighty Atom Club manga episodes certain issues were omitted leaving the conclusion that these issues may not have stories that involved the participation of Dr. Tezuka.
And as we now know (thanks to... well you know), that the issues not listed in previous episode guides contained manga adaptations of anime episodes from the Mighty Atom TV show done by his assistants. The only exception may be the last issue which may have contained a heretofore not known Atom manga story which most likely was done by one of Dr. Tezuka''s assisitants.-Astrobuddy

oh thanks jeffbert! I may get a kindle version of some of the comics in english and read up on the series a little more. Always like reading manga before watching full anime adaptations, if I can.

Astrobuddy - Yeah, that sounds likely. The sources haven't grown too much over the years. Not sure if these classify as official chapters or doujins (though not self-published) as they weren't illustrated by Tezuka himself. But then again, some Atom Club Magazine chapters did re-release in future prints of the manga. But the episodes were official, with slightly different details. I don't know -- it's hurts wrapping my brain around it

since mandarake is running out of stock for some issues, I may post some auction listings from Yahoo japan when they appear so others may get a chance to own certain issues they want. (due to COVID 19, only certain shipping methods are available).
Top
Post Reply
91 posts