Atom: The Beginning is a manga prequel to Osamu Tezuka's Astro Boy series illustrated by Tetsuro Kasahara and written with the support of Masami Yuki and Makoto Tezuka, Osamu Tezukas son. It began serialization in Hero's Inc.'s Monthly Hero's magazine on December 1, 2014.

Japan in the near future suffers an unexplained major disaster. Five years later, reconstruction is well underway. Umataro Tenma and Hiroshi Ochanomizu are two genius graduate students studying robotics and have recently completed a robot called A106 that features their experimental "Bewusstsein" AI. They pin all their hope on robot development while both of them have different ideas on what robots should be. Tenma wants to create a god, while Ochanomizu wants create a friend. What and who will their creation A106 be?

Since the manga is on-going I though it would be cool to have a thread where can discuss current chapters and volumes.
"In life, unlike chess, the game continues after checkmate" - Isaac Asimov
Top

There was an Anime based on this manga that ran for a single 'season'. I think it might still be available on Crunchy Roll.
BTW A106 is a Japanese play on words that means "Atom"
[sigpic][/sigpic]

As I recall, it was on PRIME.

The newest chapter is always free for two weeks (until the next gets released).

The manga is getting more and more tragic, especially compared to how light hearted it started. I feel like the arc might come to a dramatic conclusion soon.
"In life, unlike chess, the game continues after checkmate" - Isaac Asimov
Top

Looks like the english version of Atom: The Beginning is getting updates again as well:
https://yourewelcomescans.wordpress.com ... 2-release/

*SPOILERS FOR CHAPTER 42*
I have to say I really like how both, Ochanomizu and Tenma, are written. Ochanomizu is a lot more impulsive than when he is older, but only when it comes to matters close to his heart such as injustice, violence against people or robots, the destruction of robots etc. He is also taking a stand against Tenma when he doesn't agree whith him while not disregarding him as a person. He tries to reach Tenma and talk him out of his destructive mindset as much as he can like in the 03 series.
Tenmas characterisation is good as well. He is written choleric, but also cold and emotionally detaches enough to make his transition into a villain believable while maintaining the fact he, while not directly showing it, cares for certain people around him.

I enjoyed the panels and writing in this chapter alot. First Tenma is showing sitting at a laptop thinking about how to fix A106 while later on suggesting to Hiroshi that they should give up on him. He is not able to face Hiroshi tho, turns away and looks to the ground. To me it seems like he does care about A106 but by labeling him as a piece of junk it's easier for him to give up on him and not getting attached or emotionally invested such as Hiroshi. It might be because he lost his parents at 16 so he doesn't want to get emotionally invested into others because losing them would hurt him again. Especially the last view pages hit me like a brick the first time I read them.
Kudos to the art in this chapter, a lot of times expressions or body language tell more than 1000 words. 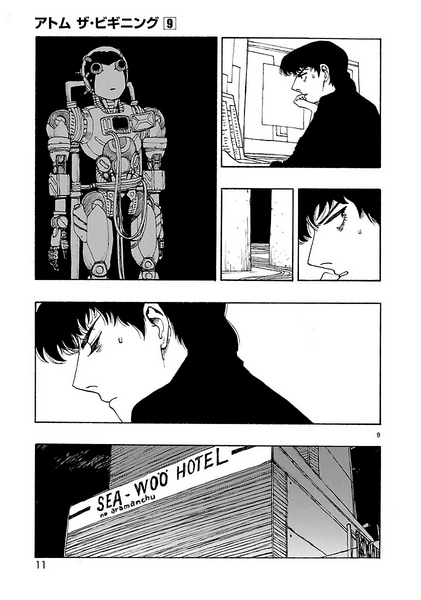 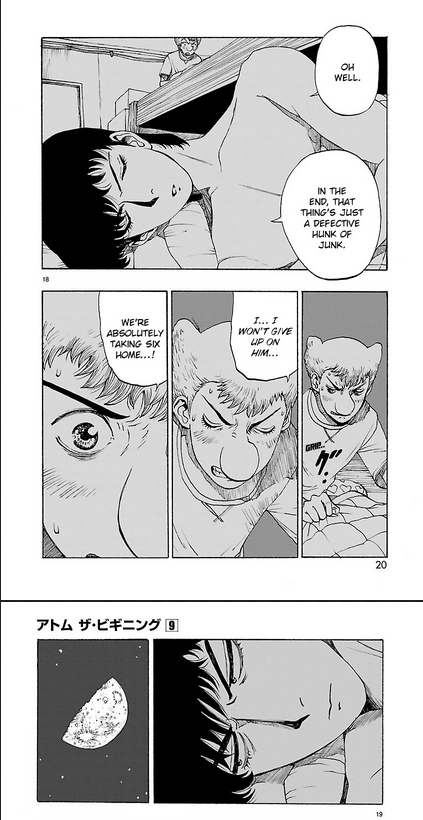 "In life, unlike chess, the game continues after checkmate" - Isaac Asimov
Top

In the newest translated chapters (Chapter 50/51) we get some Astro Boy and Tobio references.

*Spoilers*
Hiroshi Ochanomizus grandfather is looking for a robot child from the future. Together with 2 other characters, Hoshies mom and a scientist, he finds some data on him. We see Hoshies mother Tsuki recognizing that the features of the boy shaped robot are similar to Hoshies. We basically get a confirmation that Tobio inherited the looks of his mother.
"In life, unlike chess, the game continues after checkmate" - Isaac Asimov
Top

New Atom: The Beginnen Chapter (56) has been published in english!
In this one a lot of 60s Tenma personality is shining through and Ochanomizu is gracefully putting him into his place.
"In life, unlike chess, the game continues after checkmate" - Isaac Asimov
Top

The last japanese chapter of the first Arc (Lab 7) from Atom: the Beginning has been uploaded. The series will go on hiatus for about half a year. I assume the english chapters will still get english translations so there is a chance for catching up to the current one.
The 1st arc has been one wild ride so far.

It looks like we‘ll continue 30 Years later where Hiroshi is around 56 while Tenma is 50. Tobio, with Hiroshi standing in the same room, reactives Tenmas and Hiroshis Robot A106. I‘d love to see more of Tobio so I can’t wait for the 2nd arc.
"In life, unlike chess, the game continues after checkmate" - Isaac Asimov
Top
Post Reply
8 posts • Page 1 of 1

Users browsing this forum: No registered users and 16 guests