I'm not sure where my family got them, but they did say it was a little hard to find good T-shirts. The top one has Tezuka Productions tags and seems fairly new. The bottom one has Queens, NY printed on it along with the Tezuka Productions copyright.

Nice shirts, but I must have my pocket tees!

Besides that, who would wear them instead of stash them away in mothballs?

During the summer we had a "super hero tee shirt" day at work. My supervisor wore a Batman tee, if I had one of those I'd have worn it! (Not tucked in!)
[sigpic][/sigpic] the picture with most of my Tezuka collection (well i still have way more Tezuka DVD's) since i recently took photo's from my total collection that even came in a Dutch Anime magazine because i won the contest show you're otaku room. Your collection is amazing, Tetsuwan Atom. Congrats on winning that contest! You may just have the most Astro Boy and Tezuka merchandise out of any of us on here.

the 鉄腕アトム fan
Beyond the Stars
Posts: 2396
Joined: 3 years ago

Postby the 鉄腕アトム fan » 5 years ago 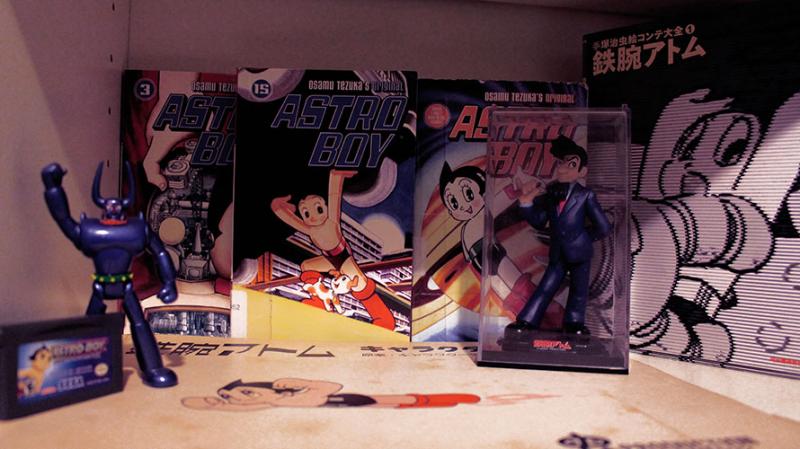 
Its all books mostly. Of course theres the concept art booklet I got from eBay (seen underneath the Pluto figure, the Omega Factor game and the Tenma statue), but theres also a more recent book that showed up. The little grayscale one in the corner to be specific. Its a compilation of multiple storyboards used for the 1960s and 80s TV series. It also happens to share some of the drawings shown in the concept art booklet I got from eBay, this book however was put out sometime in the 90s and is an actual published work while the other was made (presumably) for the animators of the original show.

interesting book, the one about the 1960s.

the 鉄腕アトム fan
Beyond the Stars
Posts: 2396
Joined: 3 years ago

Postby the 鉄腕アトム fan » 4 years ago

So my mum came in asking is a boxset was really Japanese because my mum cant tell the difference between Chinese and Japanese, it's the Little AstroBoy DVD bokset in Japanese!!!!! Which shall be mine in 9 days!
Go Go Go Assstttttttttrrrrrrrrrrrrrrroooooooooooooo Boooooooooooooooooy

Any idea where I can buy astro boy toys in Singapore???
Top
Post Reply
556 posts

Users browsing this forum: No registered users and 5 guests