It's funny that you say this is the worst of the dub episodes, considering that this has never been one of my favourite episodes. Having seen your comparison though, I think I should give this episode another chance. It seems really cute in Japanese, compared to the dub version.
Top

Referring to your 1st post, Fauna, you mention the little girl with the cat ear hair band is named 'Vivian.' I must have missed something, because I though her name was never given. In which episode was it stated?

"jeffbert" wrote:Referring to your 1st post, Fauna, you mention the little girl with the cat ear hair band is named 'Vivian.' I must have missed something, because I though her name was never given. In which episode was it stated?

I remember forum user mr_skunk referring to the girl as Vivian some time ago, but I myself haven't heard it said in the JP version yet. It might be dub only? I'll have to check along the way.
Top

You've got to be the best on the forum at comparing the dubs there is.

I joined this forum in late 2013 when I was 15 going on 16. Ignore my oldest posts, they embarrass me so much that I've considered permanantly leaving the forum more than once. I've grown out of my fangirling phase over Black Jack, Atom and Uran ages ago but the memories still embarrass me at times...

Thanks, Fauna. I am sure no name was ever mentioned for that neko-eared girl, though I could be wrong.

I think she was named in the PS2 game, and I think it might have been Vivian... Really not sure though.
My Tumblr
Top

Here is a thought: In #2, Ochanomizu says something about robots needing to understand humans. 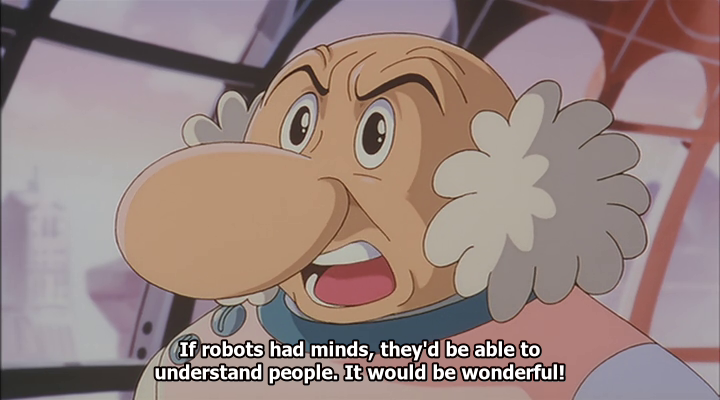 As I recall, Dr. Gall, acting on a request from Helena, gave the robots 'souls.'

Helena: "They couldn't hate us if they were only a little more human."

Thus, the human raced was doomed, & the robots rose to become the dominant species. :d evil:

Of course, these are biological robots, not electromechanical, & thus, not subject to computerized regulation of their activities.

We're back, everyone! Sorry about the gap; I had some school projects to do, and I honestly had to take a break after looking at the dub of episode three. Today's look is at an episode I've long liked, but will the English version be able to catch up?


When the episode originally opens in JP, there's no background music at all, which made Denko's laughter more startling initially.

When Tawashi goes to talk to Ochanomizu, Ochan was telling him in JP that the only robot that could perform such a robbery would be Denko the invisible robot. In ENG, Tawashi just assumes it's a ghost, and Ochanomizu tells him magic isn't real in detail. Skunk is also better introduced in this scene in JP, where they called him "that big criminal" as opposed to just throwing out his name.

About 8 seconds of Astro running to school while Ochanomizu narrates is cut. Followed by barely a second of Ochanomizu moving his mouth to say "yes".

And then we lose another 1 second of the pan going up the side of the school.

It's not said in this episode, but the teacher's name is changed to "Ms. Midori", as opposed to Midori Niwano being her full name. In later episodes, I've even heard her referred to as "Ms. Miyoki"? In ENG she sounds really menacing when she assures that the class "always welcomes new students".

Tamao becomes Alejo, Kenichi becomes Kennedy, and Shibugaki becomes Abercrombie. Shibugaki's dub voice is better than in JP; in ENG, he actually sounds like a 9 or 10 year old boy. Meanwhile, Candi Milo plays Kenichi with an embarrassing "Black" accent. The Captain Go is now the Sky Rider, but I find this change all right.

However, from the school introduction scene and on, the dub is actually pretty good. There's no cuts or major line changes, and you could watch this section of the episode and it'd be just as good as the JP version.

Of note is the matter of Denko. The way Denko's name is written in Japanese - Den Kou - leaves it pronounced just as "Denko" because a U after an O just extends the O sound slightly. In JP, Denko was a genderfluid robot...neither gender but you could still refer to Denko as she/he/they and it wouldn't really matter. (Denko refers to themselves as boku, a boy's word for "I", and is referred to only once with a gendered pronoun [male, kare], while their name ends with ko like numerous Japanese girl's names do.) The dub chooses to make Denko female and pronounce the U in her original name, resulting in Denkou, said like "Den-Koo". I don't find this change bad at all. I remember being really glad as a kid to see a girl hang out with Astro and his friends and not be forced into being the love interest.

The rest of the episode continues to be perfect until this clip of Skunk talking menacingly is spliced in before the commercial break. I get it could've been done to reinforce the incoming serious plot, but it feels awkward to suddenly see Skunk mumbling to Denko.

The guitar music originally playing in JP when the kids decide to meet for the festival was really pretty and nostalgic feeling, so there's one loss, if any.

Wally Wingert is really, really good as Skunk Kusai. I could maybe suggest that he try to go a little more for the slight smoker's rasp that Kazuki Yao had...or for whoever told him to play so many other characters to please stop.

Denko being shoved into a wall by the ponytail guy is cut. Considering Denko is about 6-8 years old, and the guy looks at least 35, this cut is understandable.

The ENG addition of Skunk's line, "Of course! Have I ever lied to you?" sets up the twist in the story really nice. But then later at the pool table, he goes "bada bing" for some reason. I thought it was cool as a kid, but now it feels like mouth movement filler.

Then we hit a really big change. Through Astro's voiceover, the bomb belt is changed to an "EMP Device" designed to cause a power outage. This really lowers the stakes during the scenes of where Denko needs to be rescued.

3 seconds of the SWAT team lowering their guns in confusion is removed.

A quick close-up on the skimmed shot on Denko is cut.

The edited-out violence is exchanged for a really dark line change, which I feel works better than all the shots of Denko getting hurt. The reward she was promised in JP was just referred to as "a reward", but in ENG, she was promised she'd be able to go to school with other children. The English version even has it more apparent that she trusts three violent criminals, the only family she knows, more than other children or the police...this is really important to note because there are people out there, many of them kids, who need to be told that they need to get away from toxic family members who may be using them. This may be the only time a dub episode has improved on the message of one of the 2003 episodes.

The SWAT team searching the alley is cut by 2 seconds. At the same time, Astro's dialogue comes in to remind us that it's not a bomb, just some blackout generator. Even as a kid watching the dub, I knew it was really a bomb. But...now that I think of it, this episode would have aired in America barely three years after September 11, so maybe the censors made the right move in deciding that a cartoon bomb scare wasn't something people needed to see at the time.

Denko almost being shot in the alley is cut. It's a super dark turn from the rest of the episode, so again, I can understand this.

While the wavering alley bit is only cut down, a whole bunch of stuff Denko hallucinates when running away is cut. It's actually pretty horrifying with the original JP music, like an End of Evangelion for kids.

Another part of Denko sitting in an alley, and then thinking a firework is a shot at her, is cut. In ENG, you just see Astro waving the flag and her looking up.

The second-by-second countdown that happened while Astro flew down to grab Denko was devoid of any music in JP, and I think it should have been the same in ENG, too.

This really nice pastel of the kids celebrating is cut, losing 5 seconds.

Verdict: I have to admit, the Japanese episode is disconcertingly brutal towards a kid as young as Denko. The dub did cut away a lot of stuff, but that stuff was pretty horrifying, and they made Skunk's "reward" betrayal a lot worse and added a strong message (aside from the bomb being changed, but I already gave my theory on why it was changed.) The dub episode is for the most part, just as good, if not a little better, than the JP version.

Next time, I'll be watching the Atlas episodes, and given what a lot of you have hinted at earlier in this thread, I don't know if I'll be going as easy on those episodes...!
Top

good analysis here. We all know MY feelings on the dub

I've had this theory since the beginning that they felt the need to cute so many of Astro's "cute" moments because;
1) time. Most of it doesn't directly drive the plot and every second wasted is a second they can't cram in a commercial and America does have more commercial breaks than Japan.
2) In between the attitude, the raspy voice, and the catch phrase, it's obvious they wanted Astro to be "hip" and "cool" and "butt kicking" and anything remotely "cute" about him would turn off the little boy audience they wanted watching and buying the toys. I guess they thought boys didn't want to play with toys of a boy who plays with building blocks, pretends he's a humming bird and generally acts like a child. This annoyed me to no end because Pokemon is the biggest anime in America and that's chock full of cute things and no boys seem to be bothered by that. Also, about a year later we get Avatar: The Last Airbender starring a child who actually ACTS like a child and guess what? It's a huge hit!! :d oh: granted, doesn't play with building blocks, but you still get my point here.
Last edited by Dragonrider1227 on Fri Mar 28, 2014 1:30 am, edited 2 times in total.
The Amazing Astro Toy: The Adventures of my Astro Boy doll
Top
Post Reply
48 posts