by Fuzzy Pickles!
Mod edit: I've added info and links about the show.

(Click on the spoiler tags to view the images.) 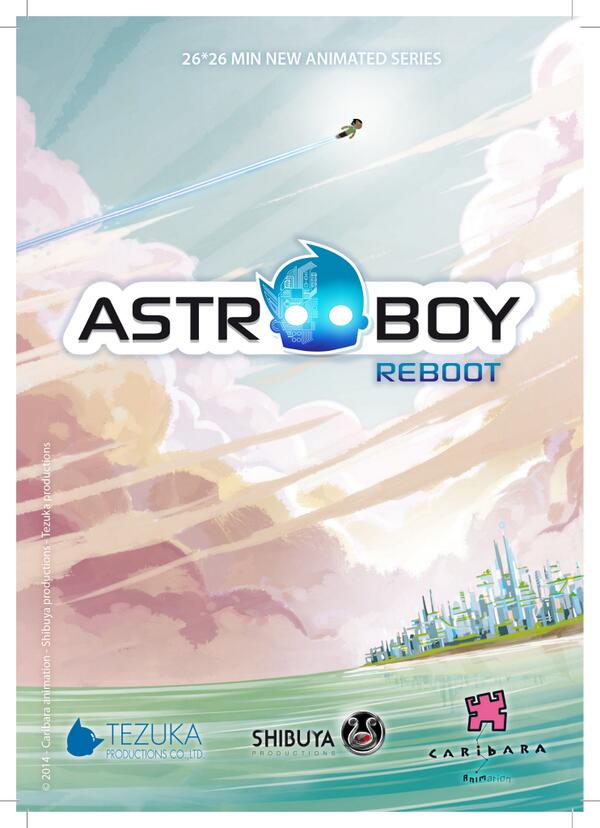 
When is Astro Boy Reboot going to be released?

There is currently no release date for Astro Boy Reboot.

Previously, there was a magazine article from 2015 posted on Shibuya Productions' Facebook page that shared an article from a French publication regarding Astro Boy Reboot, and how the show was planned to be released in 2016. The 2016 release never came to be. The link to that magazine article has unfortunately been lost to time.

According to Shibuya Productions president Cedric Biscay, from a November 2015 French video interview, Astro Boy Reboot was being planned to debut on TV stations sometime in the "back-to-school period in 2017". This would've put the release date for Astro Boy Reboot somewhere in Fall 2017 (the September to December time frame). This video is no longer available online.

Two Nikkei Style articles from April 2016 and May 2016 reported that Astro Boy Reboot would be released worldwide in 2018, starting first in France and then going next to developed/industrialized countries. However, the 2018 release never came to be. You can view these articles in the first and second links below.

What languages will Astro Boy Reboot be broadcasted in?

It'll be released in French and English first, followed by Japanese and other languages depending on broadcasters in other countries. Shibuya Productions is currently in negotiations to broadcast the show on television stations in France and the United States first.

How many episodes will Astro Boy Reboot have?

There will be 52 episodes which will each be 11 minutes long.


What kind of art style will be used in Astro Boy Reboot?

It'll mix both 2D and 3D/CG animation, but will focus more on the 2D animation.


What genre is Astro Boy Reboot?

The genre will be "Science Fiction/Action/Comedy".


What is the target audience for Astro Boy Reboot?

The target audience is "8+", particularly 8-12 year old kids (6-11 according to Caribara Animation).


What will the story be in Astro Boy Reboot?

There is a synposis on Shibuya Productions' Astro Boy Reboot page:

The story is about a small, powerful robot convinced that he would have to become a little boy, in order to be loved.

However, he is extremely rational, logical and strong. He does not know how to lie or how to play …. in short - he really is not a little boy!
Yet he has emotions, even if he doesn’t know how to manage them. Through his adventures with his two human friends, Fubuki and Akino,
Astro is going to learn how to accept himself just the way he is - with all his weaknesses … and strengths.

Astro Boy Reboot's producers have the right to create a completely new story. As the Variety article states: "The retread will be set in the present and boast a contemporary design, targeting new generations of kids. It will incorporate new characters and combine positive things from the past version and new elements."

The name of the city in Astro Boy Reboot (the one shown in the promotional images and teaser trailer) is "Divercity".


Which characters will appear in Astro Boy Reboot?

Astro, Atlas, Tenma, Tobio, Tawashi, and Skunk are the only characters that are confirmed or rumored to return in the series so far. There are also four new characters confirmed to appear, two of which are named Fubuki (the boy in the 2016 poster) and Akino (the girl in the 2016 poster). They are Astro's two human best friends. Also in the Monaco Anime Game International Conferences 2016 promotional poster, a robot with a line of text on his chest that reads either "I4M3S" or "J4M3S" is a new character of some sort that will appear. A final cast list for the series has not been revealed yet.


Anything else I should know about Astro Boy Reboot?

More details will be listed here when they're made available.

I am curious to see more about this upcoming new series. Hopefully we get more details soon because this may be something I want to see.
by Windswept Cloak
Looks interesting! I wonder what that could be. Hope it's real.

I've only briefly looked into this, although the image looks official the account is suspicious. It seems as though it has only made 7 posts, all about this 'upcoming' anime. That's a red flag for me but it could just be coincidence.

I don't have time to research this company and see if that account is official sad to say. Can anyone else validate this?
by Tetsuwan Penguin
The company, Shibuya productions seems real, I found their web site (in French). They list several projects, including the Astro boy reboot, but don't have any detailed information.
by Reid958
You mean Caribara?
by F-Man
Caribara is most likely the animating studio since Shibuya is a producer/distributor. That means we can probably expect hand drawn animation since all of Caribara's works are of this type.
by Juanita
I hope it's real! It looks really cool

by Sporkia
This is cool! I hope we get more information on it, though, so I can really get excited.
by Shiyonasan
[Incorrect info removed.]

"Shiyonasan" wrote:Well, we did hear about a new Astro Boy series coming to France not too long ago, did we not?

Where?
All times are UTC
Page 1 of 70
Powered by phpBB® Forum Software © phpBB Limited
https://www.phpbb.com/