"jeffbert" wrote:I do not know about the Kappa Comics Extra 2003, other than what you have told me, but the 2 sets of KAPPA reprints I have are nearly identical to the DH & these are in some cases very different from the reprints of the original comics. But if you have that page, then you have a reprint of either the CA or the ST. If yours includes the few pages that precede Tezuka's intro in the DH, your Kappa Comics Extra 2003 is almost certainly the CA. The ST features an intro by Tezuka, in which his reflection in a pond makes him appear upside down for the 1st 5 or 6 panels.

So the KCE2003 must be a reprint of "The Space Travelers" as this would be the first collection and reprint of "Atomu Taishi". From what you said about the differences from CA to ST, ST must be the first reprint collection of CA, except that apparently rather than just reprint the serial, some new panels were added. As Tezuka was a perfectionist, he may have felt embarrassment over the quality of some of the artwork. By the time of the Akita Shonen reprints, Tezuka claiming that the artwork was lost could then redraw "Astro Boy" for a whole new generation. After all the set was supposed to be a streamlined version, as illustrated by the fact that a whole new origin story was drawn.

Now if we can only solve the mystery of the page with the creator with the dark glasses that you said you had never seen!

I have no idea about that guy; but several roles have been changed in the later versions. I was just comparing SEA SERPENT ISLE versions when I realized that Higoeyaji had two roles in the original one!

Thank you for your response. Initially I had presumed that this was the original vision for Dr. Temma, but from what you state, CA shows the known Dr. Tenma and this fellow does not appear in CA.

The image was part of pages of Tezuka artwork which were exhibited in Japan shortly after Dr. Tezuka's passing.

My best guess is that this was an early conception of Atom's creator, but was for some reason discarded by Tezuka.
Any one out there reading this and has more definite information, please come forward!

I look forward to more detailed analysis of your prized possession, (envy,envy), when you get a chance. Happy Holidays! 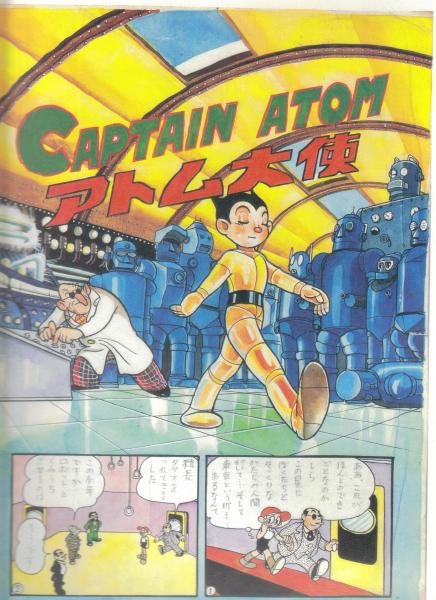 You're welcome, ASTROBUDDY! There is so much I could put in this thread, but then, why make a book?