Atom: The Beginning debuted in the January 2015 issue of Shogakukan's Monthly Hero's magazine, which was released in Japan on December 1, 2014. New chapters are released in each monthly issue, which are distributed to 7-Elevens in Japan.

No international release of the manga has been announced.

An anime adaptation was announced at the beginning of Chapter 19; it aired from April 15, 2017 to July 8, 2017 on NHK in Japan. The English subbed version was available through Anime Strike, a paid subscription service in Amazon Prime. Two Blu-rays were released for it, which you can find links to purchase them in the stickied "Official releases/videos" thread in the Astro Boy Discussion sub-forum.

You can purchase the first two volumes of Atom the Beginning from Amazon Japan. Volume 1 contains the first five chapters of the manga in Japanese:

I don't know how I missed this article, but this news came out over a month ago. Pretty interesting to see more manga for the series.

Atom: The Beginning series to tell story up to birth of Astro Boy

The temporarily titled Atom: The Beginning will premiere in the magazine in the January issue on December 1. Tezuka's son Makoto Tezuka is handling the editorial supervision of the manga, and the series is in collaboration with Tezuka Productions. Masami Yuuki (Patlabor the Mobile Police, Birdy the Mighty creator) is credited with "concept works" for the series.

The manga will tell the story of what happens up until the birth of Astro Boy, and is considered an "episode zero" story.

This sounds very interesting, I'd like to see it. I wonder if someone there read the fan fiction I did on that theme ( prequel).

"Tetsuwan Penguin" wrote:That's Atomu in big red letters on the cover isn't it?

This does sound interesting, thanks for finding this Shiyonasan. I saw Ride Back and it was really well thought out, solid writing and an interesting plot. I think it will be interesting to have a prequel written from the same mind of Ride Back.
My Tumblr
Top

Just when I thought I had everything necessary to write my book!

Here is a slightly better quality image of the characters in the manga:

So it turns out that the blond guy with the round nose is most likely Ochanomizu, and the guy with black hair is most likely Tenma. Not sure who the female character or the robot are supposed to be.

Looks like this manga might take place back when Ochanomizu and Tenma were in their youth or young adult years! Interesting stuff.
Top

I'm probably going to buy the issue with this first chapter in it, since I'm not sure if it'll ever be put in an omnibus. I remember when Toshihiro Ono made an alternate Birth of Mewtwo manga, and that was only available in a single issue of CoroCoro that now resells for $350-700. (Which is a huge shame, since Dr. Fuji is super cute in it...)

I almost wonder if the white-haired guy in the promo picture is Dr. Pavlos, from the 2003 series. That's definitely a young Ochanomizu and Tenma, though.

People that can read Japanese:

Does it say in this link that they are offering the volume with Atom The Beginning in it for free? It looks like the free offer might've only been until November 16. Even so, I don't know if people outside of Japan can order the volume through this special offer anyway. :d oh:

Regardless, we got a nice, large image of the robot from the manga from this link: 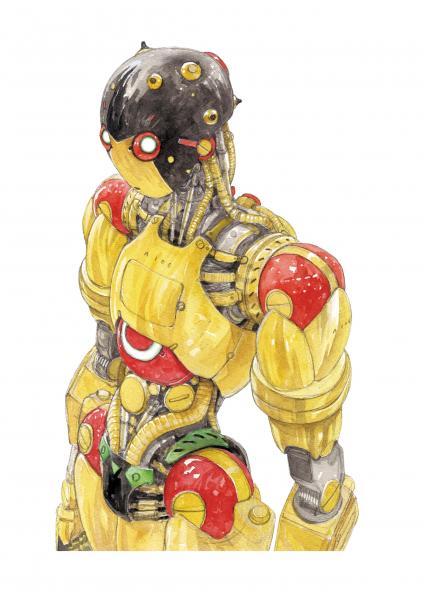 Hm, my Japanese is really rusty, but from what I was able to see I did not see any limitations on the free offer, and the offer I believe is for a digital copy anyway. I'm not entirely sure either if you have to have a Japanese IP address in order to view it, the only real way to tell for sure is to just TRY.
My Tumblr
Top

You'll need an e-reader of some sort to see the free issue. I'm about to try downloading one of their supported readers, the LINE Manga phone app. I also suspect that this free album is also just the first one they ever published.