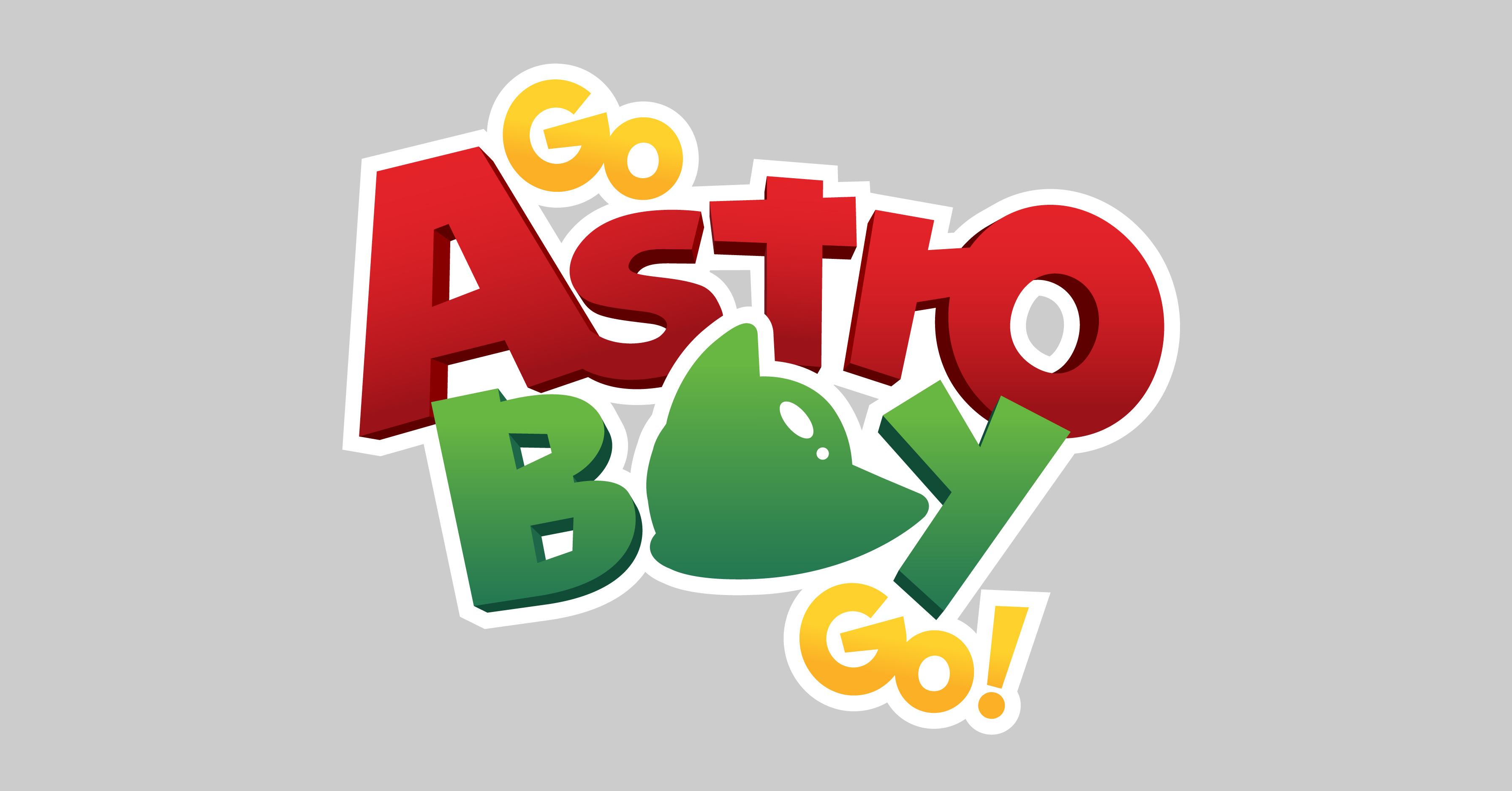 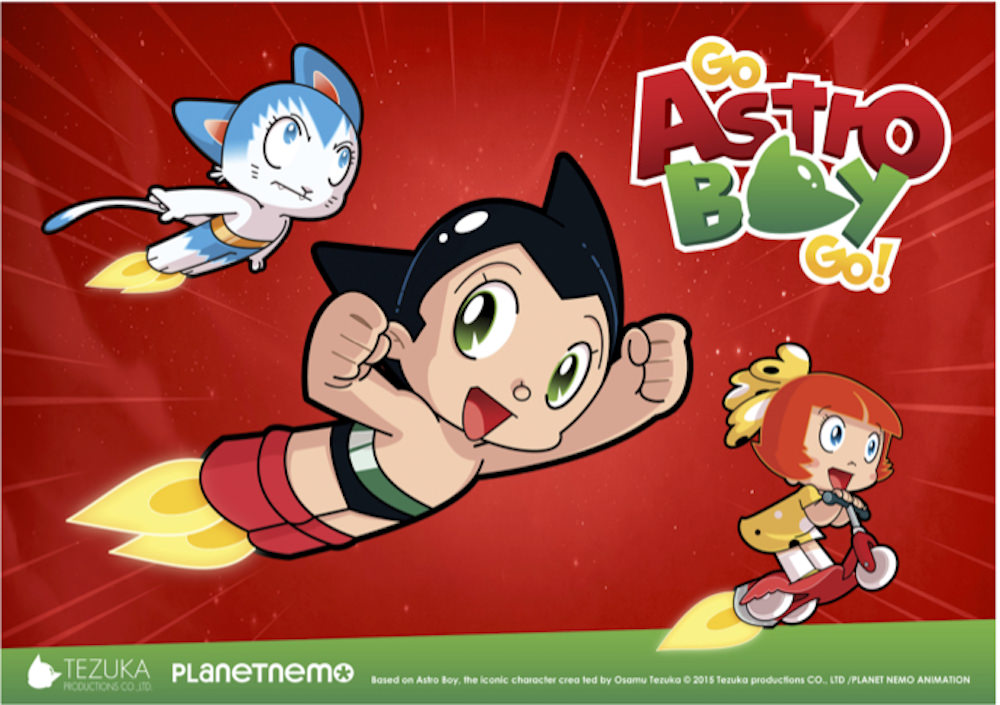 Go Astro Boy Go will be coming out in Q3 2019 according to this online publication: 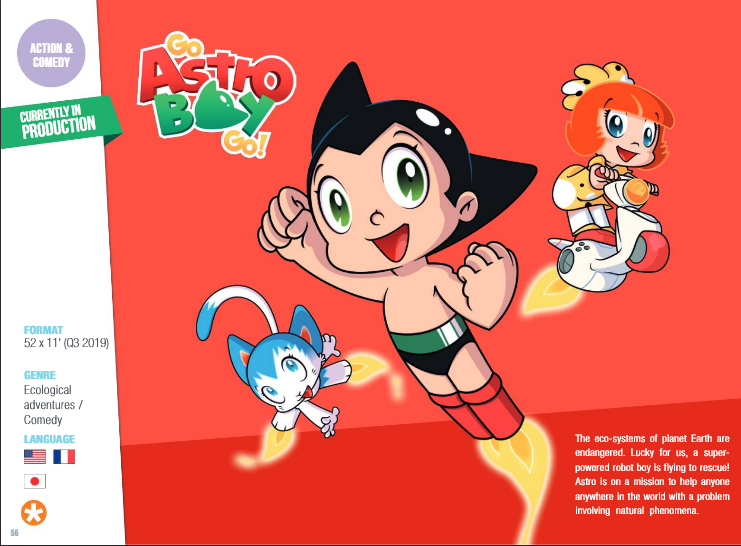 The English opening for Go Astro Boy Go has been posted online by Planet Nemo:

There are two different videos on the site (two of the three links are the same though).
The island looks like Astro's head!
[sigpic][/sigpic]

An online publication dedicated solely to information about Go Astro Boy Go has been posted by Planet Nemo president and co-founder, Frédéric Puech.

Included in the publication is an overview of the production aspects of Go Astro Boy Go, in-depth details about the main characters, and summaries of the first 5 episodes of the series.

Some images from the publication (click on the spoiler to view the images): 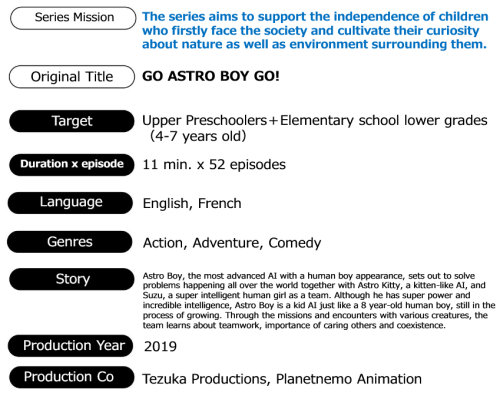 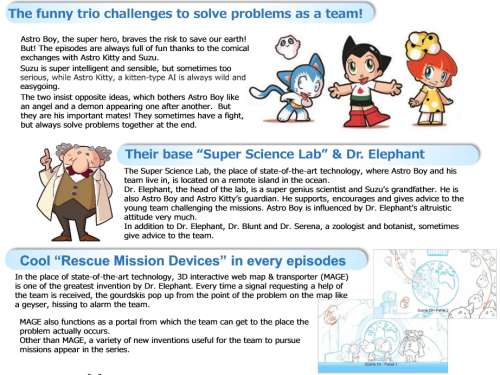 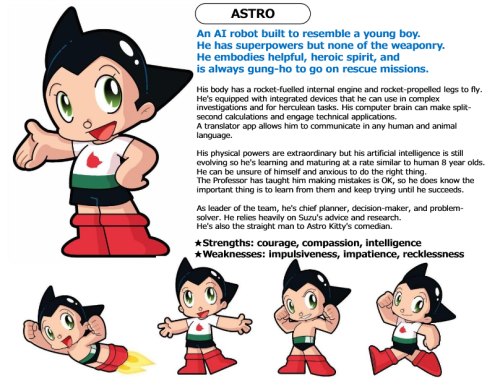 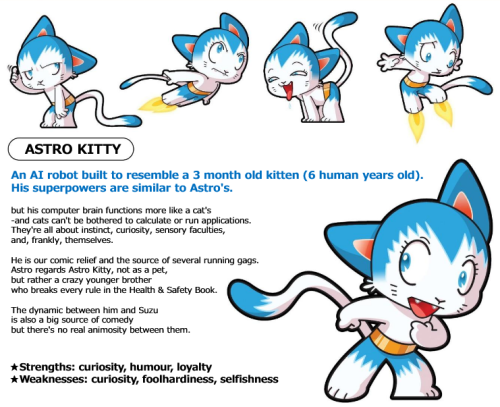 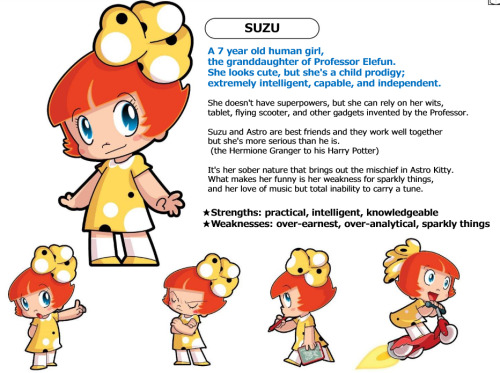 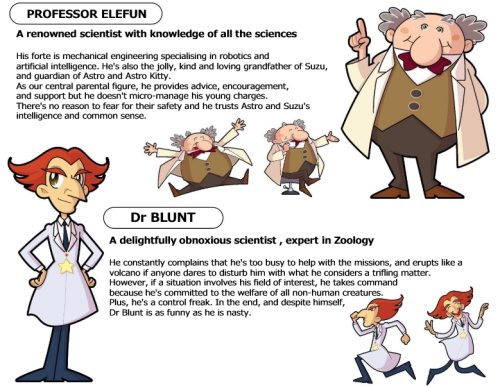 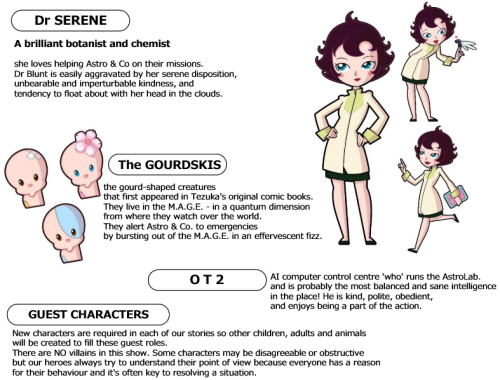 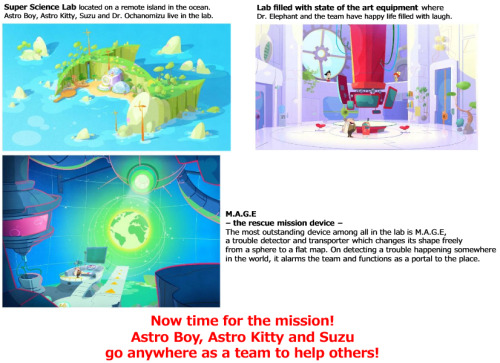 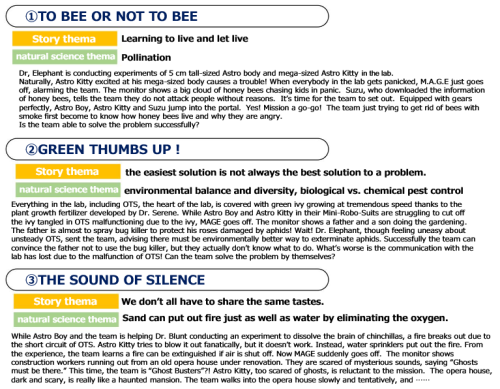 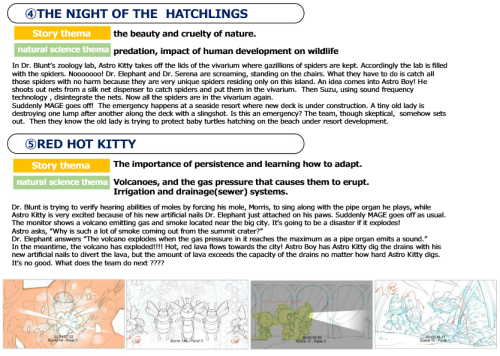 They left out the 'little astro boy' series when they showed Astro's history.
Dr. Elefun was also referred to as Dr. Elephant in the descriptions.
It looks like Astro won't have the fanny guns and lasers.
Not sure if Dr. Blunt is based on Dr. Tenma.
Are the Gordskis supposed to be Hyotantsugi?
I wonder when the first episode will be aired, and where can we see it?
[sigpic][/sigpic]

It is sad that they did leave LAB out of the history, but I think because LAB was such a niche series that only aired in Nigeria, people aren't really aware of it. Though in that case, it is odd that Go Astro Boy Go was initially also called Little Astro Boy.

Dr. Elefun was also referred to as Dr. Elephant in the descriptions.

Yeah, I noticed that mistake as well. They call him Dr Ochanomizu near the end of the publication too.

I have a feeling they'll call him Professor Elefun in the English and French versions, and Dr Ochanomizu in the Japanese version.

It looks like Astro won't have the fanny guns and lasers.

Probably because GABG will focus more on the educational side of things rather than the action.

Not sure if Dr. Blunt is based on Dr. Tenma.

I've thought that since Blunt was first revealed. He resembles Tenma quite a bit. It begs the question then of why they didn't just use Tenma then, but perhaps Planet Nemo wanted to make their series a little more unique.

Yup! They even refer to the Gourdskis as the "gourd-shaped creatures that first appeared in Tezuka's original comic books".

I wonder when the first episode will be aired, and where can we see it?

That still has yet to be revealed. I'm thinking they might have a deal in place for where the show will air, but the channel or digital service that will show it hasn't announced it yet. I have a feeling that announcement will come soon.
Top

There's going to be little kids who grow up with this, and when they discover the older series they'll be shocked at how dark they are.

DrFrag wrote:There's going to be little kids who grow up with this, and when they discover the older series they'll be shocked at how dark they are.

Many kids probably went through the same thing with the 2009 movie too.
Top 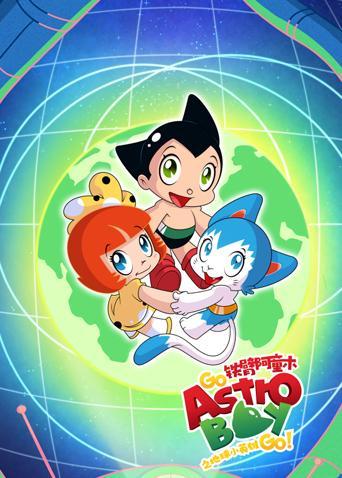 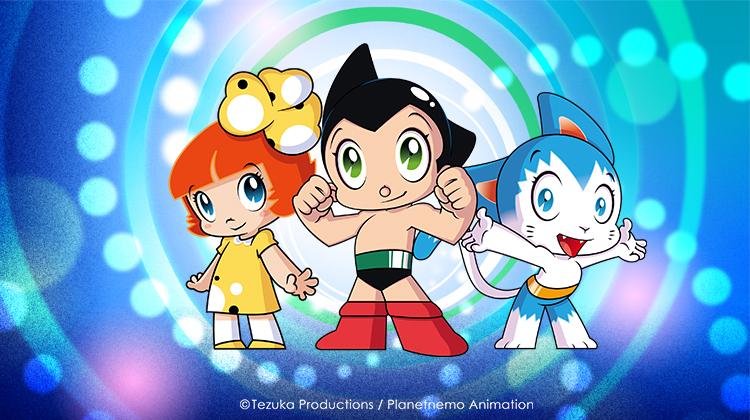 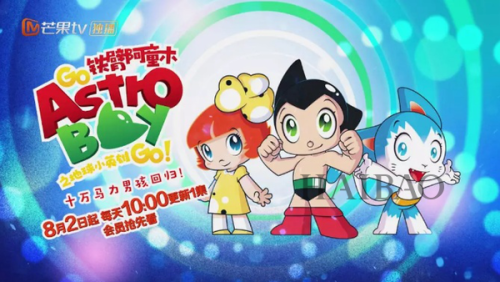 Under the background of prosperous economy and society, the cultural industry is constantly upgrading and innovating. The cross-border cooperation between industry and industry can make products more vivid. With the inspiration of animated characters and various IP images, all walks of life have realized the IP image. Authorization is of great significance to its own development. After 40 years, the classic cartoon character Astro Boy will bring a new story to meet the Chinese audience. At present, the new Astro Boy animation has been broadcasted on the Mango TV network, and viewers who like Astro Boy can watch it. I believe that the brand new Astro Boy image will inevitably cause some commotion in the IP licensing community.

The 2019 CLE China Authorized Exhibition, hosted by the China Toys and Baby Products Association, will be held at the Shanghai New International Expo Center on October 16-18. At that time, “Astro Boy’s Earth Little Hero” will be a new important part of Youyang Media’s IP matrix. It will be released on the spot on the overall strategy, development plan and cooperation case of the brand. Participants can feel at the scene. Surprise brought by the launch of the hot IP licensing business.

The new action adventure comedy theme called “Astro Boy’s Little Earth Hero” uses Astro Boy’s classic image while also incorporating a new storyline. This classic IP animation not only evokes parents after 70s and 80s. Childhood memories, Q Meng, smart, brave Astro Boy can also become a new partner of the new generation of children. During the 40 years of growth, the brand and image of “Astro Boy” has never faded from the public’s attention. In addition to the enduring stories and characters, various derivatives and activities are constantly attracting everyone’s attention. At the end of 2018, the series of activities of the author’s 90th anniversary of the birth of Mr. Tezuka Osamu was a wave of memories. With the broadcast of “Astro Boy’s Earth Little Hero”, Youyang Media, the exclusive agent of the brand’s mainland region, also launched the IP licensing business of the project.

The image of Astro Boy has been the focus of many industries in the past economic environment, and all walks of life have an expectation for Astro Boy’s new image. At present, various exhibitions of “Astro Boy’s Earth Little Hero” have started and led a new trend. The first version of TV animation adapted from “Astro Boy” is not only the first foreign animation introduced by China, but also an important cultural witness of the establishment of diplomatic relations between China and Japan. Since the broadcast on CCTV in 1980, the animation has created an ultra-high ratings that have affected the generations of childhood.

Although Astro Boy has written a series of interesting stories, each story has a positive impact. A young boy who is smart, brave, and has a skill of 100,000 horsepower, Astro Boy has become a forever hero in the hearts of countless 70s and 80s . At the 18th CLE China Authorized Exhibition, Youyang Media will also hold an annual brand and licensing business strategy conference. “Astro Boy Earth Hero” is a new important component of the Youyang IP Matrix, which will target the brand. Detailed explanation and release of the overall strategy, development plan and cooperation case are important opportunities to understand the current brand image and exchange and cooperation.

Go Astro Boy Go is entitled “Astro Boy: Earth’s Little Hero” in China, and is currently being streamed on Mango TV, a Chinese Internet enterprise operated by mgtv.com Corporation, a subsidiary of Mango Excellent Media. Episodes are being released daily on the site.

It is not known currently when voice-overs in other languages are supposed to release.
Top
Post Reply
107 posts

Users browsing this forum: No registered users and 20 guests