Amongst all the E3 bombshells this week is one Astro Boy related bombshell from the Annecy festival: the announcement of an anime adaptation for Naoki Urasawa's Pluto manga. The anime is slated for release in 2020.

Crunchyroll wrote:(I Google Translated this and made some grammatical corrections)

It's at the Annecy International Animation Film Festival that we learned that the Pluto manga by Naoki Urasawa, based on the Astro Boy manga from Osamu Tezuka, will soon be adapted into an anime series. A poster appeared on the stand of the Japanese company Genco, present at MIFA (the professional part of the Annecy Festival).

In 2012, when Naoki Urasawa came to Japan Expo, the question was asked. Producer Masao Maruyama, who had already produced Master Keaton and Monster, explained that it was complicated because the story imposes a significant number of episodes (about 39 episodes according to him at the time, i.e. 3 seasons) and few companies want to engage in such a long format these days. The series is expected to arrive in 2020.

The manga has 8 volumes, all published in France at Kana. 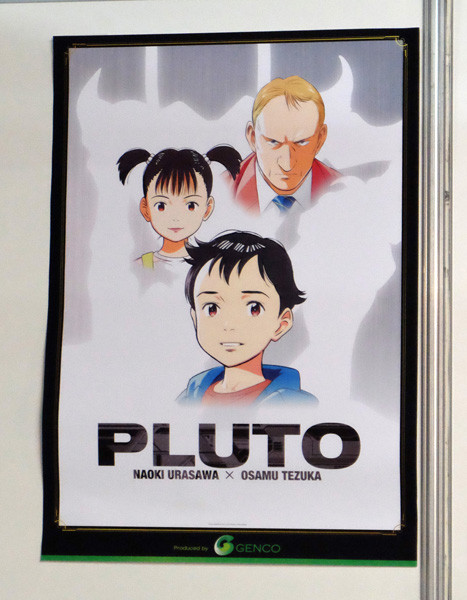 In a futuristic world where robots live like humans, mysterious crimes succeed one another. Robots and renowned researchers are murdered under very strange circumstances. All victims are found with a horn-shaped ornament on their heads. Gesicht, a robot inspector, is in charge of the case. He discovers that the victims are veterans of the last conflict in Central Asia, and that the targeted robots are the seven most powerful robots on the planet, of which he himself is a part! Inspector Gesicht then goes out to meet people and robots threatened to try to protect them from danger.

(at this rate that might even be before ABR

I'm actually more excited about this than the Astro Boy Reboot.

Woah! Awesome! I'll have to tell my friend who really liked the manga about this too.
Top

A couple of updates...

The Pluto anime will have 8 long-length episodes, with each episode containing the content from each volume of the manga, according to this source and the other source listed below:

Also, a trailer will be released in August or September of this year, according to this source:

FreakEliteX wrote:The 'Pluto' anime will be animated by MAPPA in 8 episodes

We recently told you in an entry that Naoki Urasawa's manga Pluto would have an anime adaptation. This information came from the Annecy Animation Festival this year. Today, we get new information about it. Thanks to the Twitter @ Eldur_380 account we get new information on this expected anime (note: that's the link posted above). The animation studio MAPPA ( Yuri !!! on Ice ) will be in charge of the project, which will consist of 8 episodes. Each episode will adapt a volume of the manga on which it is based.

The series will be produced by Masao Maruyama , who has collaborated on other animated adaptations of Naoki Urasawa as Monster or Master Keaton. It is not yet known who will handle the direction, but Naoki Urasawa will oversee the pilot episode of the series. An anime trailer is also expected between August and September of this year.

8 long-length episodes? Whoa. I wonder how long each one is if they're fitting it all into 8 episodes instead of the previously expected 39

Though I suspect that just means 45 minutes, considering it'd have to run on a TV schedule, and unless Japan happens to have certain channels that don't run commercials, I don't think it'll be hour-long episodes. Well, either way I guess that still adds an extra minute or two of actual episode content to the middle of each where it would normally have the OP and ED if it were 2 episodes of half the length.
Hey, I get a Pluto trailer for my birthday!

8 manga... 8 episodes... seems doable to me but of course I anticipate some cutting and adaptations. I am so happy to hear about this though and cannot wait!
My Tumblr
Top

This is honestly all I've ever wanted in life since I read the manga for the first time. 2020 can't get here fast enough.
It's a magical day!
Top

Still, condensing all that into 6 hours. Even less, when it is dubbed into English, more commercials will be wanted! I hope CR carried the subbed version!