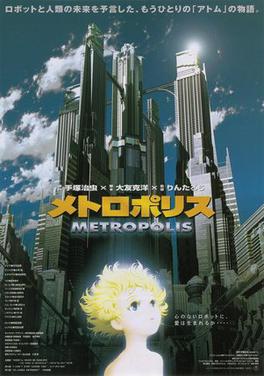 Oh i love this vintage movie,more than the Rintaro anime.

I've also the book for the last christmas by Thea Von Harbou.

Yes, and I studied the film for years.finally felling I understood enough to make videos based on the public domain footage. It is strange that one must be cautious in talking about this film which h gave birth to all robot films, unless we offend because of the vision of Lang. But e en stager that an entire sequence of Tezuka work is that gained him access to America is politically incorrect now to even discuss. Even the name, " Robo Maria" in explanation brings fear of banning today. The Metropolis Ziggurat and it's intended metaphor, and meaning. Michi, Michigan, Michiko.... etc. Yes the 2nd film tries to hard to hide itself from prying minds. To separate itself from Tezuka san's Apocalypticus evangelistic creations.
The anti industrial slavery of the first film. And the geopolitical terror of Moloch. Later Tezuka designed his hero to fight evil machines all named after evil spirits from the underworld. Just like the devouring Moloch from the first film. He made sure to incorporate that struggle in his works. All inspired by the Fritz Lang masterpiece.

has anyone seen this? or read this work? shall I?
Editorial Reviews

Starred Review.*Tezuka earned the nickname "godfather of manga" not just by the length and prolificacy of his career but by the moral commitment he brought to such projects as the award-winning*Buddha. His works deal with the most profound questions of human existence.*Kirihito*combines medical melodrama and anguished debates about guilt and redemption. The hero, complacent Dr. Osanai Kirihito, believes he's been assigned to study people suffering from a new, fatal disease that degrades them into doglike beasts. When the transformation hits him, too, he realizes that the cause is not what he was told and that the condition can be controlled. However, Kirihito soon finds out how violently society reacts to anyone who looks different. He also discovers that the medical establishment has betrayed him and now wants him to disappear permanently. Fleeing through episodes of brutal exploitation, he tries to find a place where he can function as a human being; he winds up as a combination of Jesus Christ and the Count of Monte Cristo. While Kirihito struggles with himself and other vividly drawn characters, the operatic plot swirls from one passionate scene to the next, reinforced by Tezuka's apparently simple but strikingly expressive line work.*(Oct.)*
Copyright © Reed Business Information, a division of Reed Elsevier Inc. All rights reserved
[sigpic]http://www.astroboy-online.com/forums/image.php?type=sigpic&userid=200&dateline=1323970671[/sigpic]Safe

A still from the German film Metropolis inspired the famed creator of Astro Boy to draw this graphic novel in 1949, and the process was reversed last year, when the graphic novel was made into an animated film. The tale concerns a scientist who's forced to create a genderless being named Michi and then steals it from the criminal who forced its creation. Eventually Michi runs away from its surrogate father and wanders the world searching for its nonexistent parents. Michi's encounters provide a tragicomic commentary on Tezuka's surroundings: the escalating Cold War, human folly and the search for love and affection in an increasingly harsh world. As with Astro Boy and the Disney films Tezuka loved, this work elicits strong emotions through simple allegory. The art, done in Tezuka's early style, beautifully combines classic American cartooning, Art Deco and the Disney stylings of the day. Tezuka's character designs are elaborate and decorative but never distracting, and his panels are crammed with machinery and people, giving his world a bustling vibrancy. He also never lets an opportunity for a joke pass him by. When confronted with a gun, one character says, "I've hated pistols since I was born. Pistols and carrots." Likewise, when the scientist recounts Michi's hardships, Tezuka seizes a chance for melodrama and draws the flashback sequence in an exquisite silhouette style. Metropolis has a bit of everything and is a wonderful graphic novel for both children and adults. With each American release of Tezuka's work, it becomes clearer why he's regarded as the master of Japanese comics
[sigpic]http://www.astroboy-online.com/forums/image.php?type=sigpic&userid=200&dateline=1323970671[/sigpic]Safe

I really love this movie, it's a shame so many pieces of the film are missing, lost forever. I'd love to be able to see it in completion but I doubt that will ever happen. I keep meaning to buy this movie instead of renting it all the time from our library (I think I'm the only one who borrows it,

The ironic thing about R.U.R is Isaac Asimov thought that is was a pretty horrible play but had immense respect for it due to its contributions to the sci-fi genre and introducing the word 'robot' to the English language.
My Tumblr
Top

Tezuka first wrote about robots in his manga in the Early 50's or late 40's. (Atom's first appearance was in 1951). Asimov's first robot story was published in 1940, some twenty years after RUR. I'm guessing that Tezuka was introduced to the idea of robots from either RUR or the works of Azimov, though I don't know if or when his stories were first translated into Japanese. Tezuka may have seen the play RUR before the war.
[sigpic][/sigpic]

I'm not sure if R.U.R was ever translated into Japanese or was ever performed in Asia. As far as I can tell the play was only ever really actively performed before the 1940s however it is possible various local theaters decided to perform it. Tezuka could have seen it at some point in time, he was a very knowledgeable man so I am sure he had to have at least known about the play. I don't believe the play influenced him or any of his stories beyond the nature of the 'robot apocalypse' theme implies.

R.U.R. just happens to be the first to introduce this theme into the science fiction genre.
My Tumblr
Top