Wait, he can stick things through his belt? What is this sorcery?
Top

He didn't play that one, though! That would have been hazardous to his health!
lolwut
Top

"Rejoyce" wrote:Wait, he can stick things through his belt? What is this sorcery?

Ohhh.... the belt debate, the conversation that almost broke ABO (this is grossly embellishing).

Apparently he can though. How about that?
My Tumblr
Top

"Little Brown Fox" wrote:Oi, nice, Secrets! Although, he doesn't really look younger to me... he still looks around 13 or 14. Maybe 12 at the very youngest... Idk. He's always struck me as kind of baby-faced no matter his age, anyways...

Yeah; I supposed what I meant to say was I made him more baby-faced than how I usually draw him. I agree, he still looks 13/14 ish

The whole belt thing could either be the animators having their fun, or the belt really is a fashion accessory.
Top

"Earthshine" wrote:Adorable, I can definitely see Atom in him. You have a lot of talent Doodle!

! Side note but I really hope he still looks adorable and baby faced in the live action movie.
Top

Since today is Pluto and tomorrow is Uran, I'll just write a story for BOTH of them!
Pluto and Uran


Uran ran through the thick meadow, yelling at the top of her lungs, Pikora, slow down! The small green bird chirped loudly, but kept flying as fast as it could. What are you afraid of? the girl android cried out, what ever it is, I'll protect you!

She followed her avian pet through a small stand of trees, that quickly thickened into a more densely wooded area. The ground was covered with dense vegetation, a kind of thick moss that hid the outcroppings of rocks and tree roots. Uran almost tripped several times, but managed to maintain her balance as she ran. Pikora had finally slowed his flight as the bird now had to avoid the obstacles that the trees imposed on his flight path.

Suddenly her foot struck a hard object that had been hidden from view by the thick growth of moss. Uran fell flat on her face, lying on a hard metallic surface. She slowly got up from the undignified position she had landed in, her hands resting on a strange object. She brushed the moss aside, and leaped back when she discovered that she had been sitting on a large blue robot that was lying on its back.

Meanwhile, the small parakeet had landed on Uran's shoulder and had started to peck on her ear. So you finally ran out of breath and had to stop! Uran huffed at the small bird. She slowly regained her courage and walked back to where the large robot lay on the ground. Uran took a closer look at the dormant android. He was was a good five or six times taller than she was. His head sported two large horn like projections on top. He looked rather handsome actually, and had a kind looking face. Uran pressed her ear against his chest, but heard nothing.

I wonder how long you've been lying here? she thought out loud. She felt along his chest, and found a latch release. Uran opened the robot's access panel, and looked inside. Well, it looks like you still have some energy left in you, she said looking at his gauges, but for some reason you got shut down.

Without giving the matter any serious thought, Uran pressed a button that looked like it might be a restart switch. Maybe this is all you need? she thought.
A low purring sound started within the robot's body and his eyes blinked open. You're awake? she smiled.

Suddenly, the robot jumped to his feet, grabbing Uran around her waist with his huge hand. He held up up to his face and gazed at her with confusion.
You're not going to eat me or something? she cried. Is that how you repay me for fixing you?

Where am I? the blue robot asked.

I found you here in this forest, Uran said, buried under this moss. Do you have a name?

The large robot stood silent for a while, before speaking. My name is Pluto. I am the greatest robot in the whole world!

Really? Uran said. Then why were you lying here rusting?

What! Uran yelled. That's no way to address a lady!

I'm sorry. Pluto said. I meant, what is your name?

That's better! Uran said. My name is Uran, and Astro is my brother.

What is Astro? Pluto asked.

HE is the greatest robot in the world! Uran huffed.

He'll have to fight me to prove that! Pluto answered back.

That is stupid! Uran said, crossing her arms over her shoulder. You male robots are as dumb as humans, having to fight to satisfy your egos! There are better ways to prove how great you are!

I didn't know that. Pluto said. You must show me!

I'm sorry. Pluto sighed. He opened his hand and lifted Uran up to his shoulder. She stepped from his palm and sat down next to his ear. My, I can see very far from up here! she laughed. Why don't you come home with me and you can meet my family!

Uran gave Pluto directions, and he walked out of the forest, occasionally knocking down a tree that was in his way. They reached the meadow, and passed though a dense growth of wild flowers next to a flowing stream.

What are those? Pluto asked.

What are they for? Pluto asked.

Don't you know anything?, Uran asked. Flowers are pretty and they smell nice!

Really? Pluto exclaimed. He bent down to get a better look. Uran jumped off of his shoulder and started to pick some daisies. While Pluto smelled the flowers, she made a long chain of them and wrapped them around the large robot's head. They look nice on you! she laughed. Sorta like a crown!

Pluto gazed at his reflection in the water of the nearby brook. Thank you, Uran. he laughed. They do look good on me!


Astro looked up from the front yard at the giant blue robot that was walking up the pathway. He spotted his sister perched up on his shoulder, staring down at him. Hello Ani! she laughed, I want you to meet my new friend!

Hello! Astro yelled up from the ground, My name is Astro. I'm glad to meet you!

My name is Pluto, the large robot said. I am the greatest robot in the world!

OH no, not that again! Uran face palmed. She mouthed something to her brother, pulling her right eyelid down with her pinkie finger.

Astro seemed to have gotten the message. I'm honored to meet you then! he said, bowing.

I wanted to fight you to establish my claim of superiority, Pluto said, But Uran convinced me that there are better ways to do this.

Why can't we just be equals and let it go at that? Astro asked. I have no desire to be known as the greatest robot myself anyway.

That means nothing to you? Pluto asked, confused.

It does not, Astro replied. All that matters to me is how many friends I have. That is how one measures greatness.

In that case, Pluto said. Will you both be my friends?

YES! Astro said. He flew into the air and landed on Pluto's shoulder, on the other side of his head from Uran. Pluto smiled. Thank you both! I think I'll like having friends a lot more than fighting.
[sigpic][/sigpic]

Hmmm, I think I can picture Pluto as the Tin Woodsman from the Wizard of Oz. Kimba would be the cowardly Lion, Cobalt the scare crow, and Uran would be Dorthy. I think Tenma might be the Wizard (or Ochanomizu, not sure here.....) I'd gender bend Lamp to be the Wicked Witch of the west, and Hamegg as the wicked witch of the east (I'd love to drop a house on HIM!). Only problem is what to do with Astro ..... Toto? Yeah why not, Astro once DID dress up as a DOG!

Here's Pluto, the dwarf planet. He doesn't look too happy about being a disembodied head floating in space. 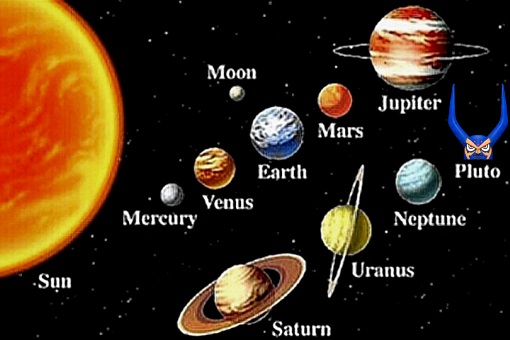 You should have put "Jetter" as "Mars"! 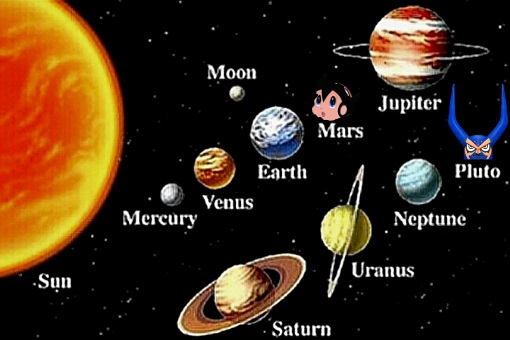