The professor grabbed his hat and coat and headed for the door.

Where are you going? Uran asked.

Are you going to drive, or walk? Uran asked.

Actually, I could use the exercise, He laughed. So I guess I'll walk.

Can Atomu-Neko and I come along with you? Uran asked. We could both use the exercise too.

Astro was already outside waiting for them.

Coming with us, Ani? Uran asked.

Hai! the boy robot replied.
He and Uran walked a few steps behind the professor, Kobaruto-Neko ran quickly along side of Uran.

Not yet. Uran sighed. I don't want him freaking out. He'd never understand!

They walked as a family, making a few stops along the way to buy some bread, and a newspaper. The professor then entered a bank and stood in line. I need to deposit a check for the Ministry, he said. Usually Yuko handles this, but she was out yesterday when I was handed this by a client. I don't know why he insisted on doing business the old way, I haven't actually had to go to a bank in ages.

Just as they reached the teller's window the bank door burst open, and there was Skunk with a few of his henchmen. His face broke into a big evil smile when he saw Astro.
Astro turned quickly, and told the professor, I'll take care of him!

Not so fast, Astro! Skunk cackled, as he pulled Fooler's gun out from under his coat.
Before Astro could react, Skunk pulled the trigger. Eat Nutzo rays! he laughed.

Astro froze as a ball of plasma surrounded him and he fell to the floor, with sparks flying from his skin. Uran dropped to the floor and cradled her brother's lifeless body in her arms. She stared up at Kusai with anger boiling in her eyes. You bastard! she yelled, balling her hands into fists.

Skunk quickly aimed the weapon at her, Would you like a taste of Nutzo rays too?, he roared with laughter.


Skunk and his henchmen had ignored the black and white cat that stood up on its hind legs next to Uran. Kobaruto's head's up display popped up into his field of view superimposed over the image of Skunk holding Dr. Fooler's ray gun. Deep within his electronic brain the autonomic subroutines put weapons systems on line that his conscious mind didn't know he had. Like a bat out of hell, he flew towards Kusai powered by ramjet engines in his legs. His forelimbs sprouted sharp claws and his open mouth displayed fangs. Before he knew what hit him, Skunk was attacked by an atomic hairball that clawed, spit, and screamed at him. He dropped the ray gun which slid across the floor, into Ochanomizu's hands.

The other two members of Skunk's gang tried to make their way to the door. They broke into a run, but they didn't get very far. Kobaruto-Neko quickly aimed a digi-beam laser at a ceiling fan, causing it to come crashing down on the would be robbers, cold conking them into dreamland.


The professor had his hands inside of Astro's open chest cavity, examining the damage. Uran stood next to him, sobbing. In the background the police had already handcuffed Skunk and his fellow bandits, and were in the process of throwing them into a paddy wagon. Kobaruto picked up the ray gun that lay on the floor next to Astro's silent body and examined the weapon. After a few moments of thought, he found the switch he was looking for and aimed the gun at his brother.

What are you doing, Coby! Uran cried out when she noticed her new pet cat about to use the ray gun.

Uran pushed the professor aside just as the cat pulled the trigger. Once again a spiral shaped beam of light, this time a golden color emanated from the device, and surrounded Astro with a shimmering halo. The weapon shut itself down and the glare subsided. Astro moaned and opened his eyes. Oh man what hit me? he asked. I have a splitting headache!

You're OK! Uran cried out with glee, as she leaped towards her brother and started hugging him to death.

The professor starred at Cobalt. Uran, is there something you haven't told me?

Uran looked at Kobaruto-Neko. The cat softly meowed and nodded its head.
My cat is really Kobaruto, she said. Tenma Sensei found his electronic brain and put it inside of a robot cat body.

And knowing Dr. Tenma, that cat probably has every single one of Astro's physical abilities, the professor smirked. I should have suspected that the moment that package arrived.


They made their way back home in silence. Kobaruto followed behind Uran and Astro. Just before he reached the front door he heard a low purr coming from the house next door.

Hello you Tom Cat! Korbaruto turned his head to see the neighbor's white cat sitting on the front steps giving him an eyeful. Why don't you come over and see me sometime, she cooed.

Korbaruto felt himself blushing as he gazed at the lovely creature that was adoring him.

Maybe later, he meowed back as he entered the house.

Let me examine you, the professor asked Cobalt. The cat backed away, but Uran picked him up and deposited him in the professor's lap. Don't worry son, Ochanomizu smiled, I won't hurt you.

The Professor opened Cobalt's chest panel and looked inside with the aid of a magnifying glass. He carefully made an adjustment to one of the circuits with a screwdriver, and then closed the panel. There, now you should be able to speak in human language as well as cat, he laughed.

Thank you, Hakase, Kobaruto-Neko replied. He quickly put a paw to his mouth as soon as he'd said that, realizing that everyone could now understand him, not only Uran.

You know Uran, The professor said. The ministry did make duplicate robot bodies for you, Astro, and Cobalt. They are safely stored away in the vault for safe keeping. Now that we have Cobalt's original electronic brain back, we can restore him to his former self.

That's wonderful! Uran laughed. Coby! You don't have to remain a cat forever!

Kobaruto  Neko jumped from the table into Uran's arms. He thought about the neighbor's cat next door and swallowed hard before speaking. That's OK, Hakase, he said. I'm actually happy as a cat. I think I'll stay this way, at least for now.
[sigpic][/sigpic]

Dude, that's creepy. Like, if you suddenly found yourself in the body of an animal, you wouldn't let yourself get hit on by an actual animal of the same species, would you? If there was any way you could, realistically you would probably try and get your old body back. I mean, that's pretty gross, man.

Outside of that, the story was cheesy, but alright, I guess.
lolwut
Top

"Little Brown Fox" wrote:Dude, that's creepy. Like, if you suddenly found yourself in the body of an animal, you wouldn't let yourself get hit on by an actual animal of the same species, would you? If there was any way you could, realistically you would probably try and get your old body back. I mean, that's pretty gross, man.

Outside of that, the story was cheesy, but alright, I guess.

I don't remember where, but I got that part from some cartoon or anime I saw somewhere else where someone was turned into a cat and was attracted to another cat and well, was happy with that. Had to give him a reason to want to remain a cat, just to fit the canon around those images from LAB2. Anyway, an alternate tie in with that 'Murondo swamp' episode.

There is another thing I didn't mention. You could ask if Cobalt was resurrected as a cat or as himself in a cat's body. While he was shocked at first to realize that he was now a cat, what if Dr. Tenma had adjusted his programming to accept that? Then it would be NORMAL for him to be attracted to a female cat that was attracted to him. It just might take him awhile to come to grips with that. (I can thing of parallels with that in human self identification behavior but I won't get into that here.) Yeah, I suppose it sounds creepy, but....
Last edited by Tetsuwan Penguin on Tue Apr 26, 2016 10:09 pm, edited 1 time in total.
[sigpic][/sigpic]

I can understand that you were trying to be cute, but it was just a bit too much, for me, at least. And anyways, the LAB2 canon seems like it would be pretty far removed from the canon you've written into, anyways. For one thing, Atom isn't a lil squab.
lolwut
Top

Do you guys remember that "present" Dr. Tenma showed to Atom in one of the last few episodes of 2003? I was rewatching that part and thought those long spikes of the new body looked a lot like Cobalt's(It's probably a reference to the new body that Atom got from the aliens in manga, but whatever this is my headcanon)

It occurred to me that Dr. Tenma probably abandoned the body in that underground lab of his after Atom rejected it. So I thought: "What if Atom revisits the old site of Robotonia and discovers the body?"

I really liked the idea that Atom would just visit it now and then, a bit shy at first(because, ya know, kinda awkward) and just sits a little away from it and tells it what's been going on in his life.

He starts to feel bad for the body, because the more he looks at it the more it looks pitiful, abandoned here as an empty shell. So he goes to Dr. Ochanomizu and asks him to build an AI for the body, so it can be a new robot by itself. They get rid of all the insane weapons built in the robot and also the armor, since Atom doesn't want this robot to fight anyone. Instead of rocket boots, it gets some (probably)harmless rollerskates. It's arm cannons are removed, too, so it looks less like a destruction robot.
Honestly Atom's a bit afraid of what the robot will be like when it wakes up. He doesn't want it-him- to feel hatred towards anyone.

But all those worries are gone when the robot wakes up, and turns out to be the most clumsiest, goofiest sweetheart ever. They name him Cobalt, and he officially becomes Atom and Uran's brother.

... I dunno how Tenma would think about that, though. 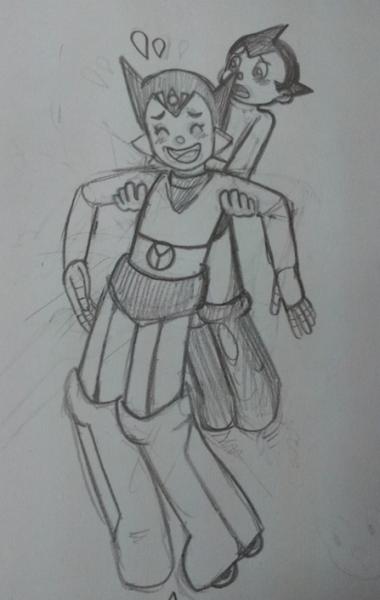 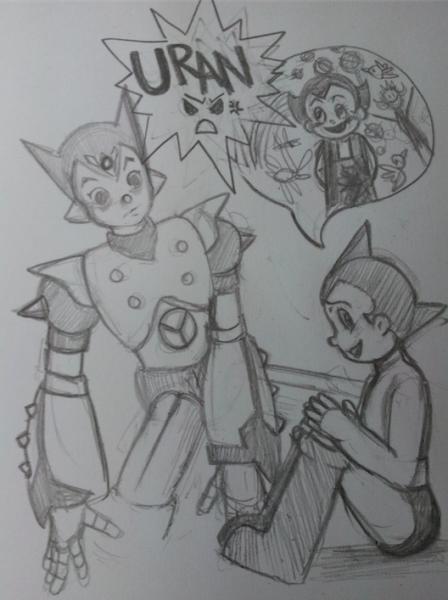 That's a really neat headcanon! I like it.
My Tumblr
Top

I can totally see Cobalt with that peace symbol on him. And BTW, Cobalt DID attempt to roller skate in the first episode that he appeared in, in the 1963 series!
[sigpic][/sigpic]

EEEEE I love this! Best way to smush Cobalt into the 2003 series, hands down.
Top