Okay, this is the korean version of Google Translate. I figured maybe since Korean and Japanese have closer roots it'd be better. Plus I can understand it

Anyhow, according to my bilingual brain, it says:

The show will be aired to developed countries in order the year after the next and it will be about a boy robot that fights villains and lives in a female doctor's home.

That's what I was looking for. Thank you, YJ_Doodle. It's good to have a person like you be a member on ABO.

I don't know what "aired to developed countries in order the year after the next" means. Does that mean it gets released in France and/or Japan in 2017 and then worldwide in 2018? Or is the whole series pushed off another year?

Shibuya said a while back that ABR would air in France and the United States first, followed by Japan and other countries. My guess is that it will premiere in 2018 in France and the United States first based on the wording in the Nikkei article. I don't know what they mean by "developed countries" or "in order", but "the year after the next" tells me that we'll see ABR in 2018 at the earliest.

Until we get confirmation from Shibuya Productions themself, I'll change the thread title to "Astro Boy Reboot (2018 Series)". At this point, I'm not surprised if they decided to delay ABR again.

This was the only important chunk about the reboot, the rest it just about copyrights of story and reveals about the movie(2019, 3 years later) [...]

I know, I really shouldn't have bugged them about this... But Shibuya actually responded to my message on Facebook about this article! Heheh. Here's what they say:

This article does not mention about the fact that Astro is delayed.
They expect a broadcasting in 2018 for some countries.
In fact they never contacted us. At this stage there is no delay but we do not know for the future because even if the series is ready on time, it can be broadcasted later. This kind of decision is taken by TV channel. 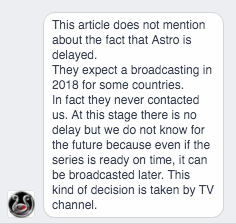 What happens if nobody wants to run this show? Or do they already have someone who wants to show it?
Top

"YJ_Doodle" wrote:I know, I really shouldn't have bugged them about this... But Shibuya actually responded to my message on Facebook about this article! Heheh. Here's what they say:

This article does not mention about the fact that Astro is delayed.
They expect a broadcasting in 2018 for some countries.
In fact they never contacted us. At this stage there is no delay but we do not know for the future because even if the series is ready on time, it can be broadcasted later. This kind of decision is taken by TV channel.

Thanks for checking with them! I've changed the thread title back.

Come to think of it, there's something I didn't consider before: perhaps in Japan, Astro Boy Reboot won't debut until 2018. After all it was a Japanese news site that reported the news.

So far, all we know is that France and the United States will be first to get the series (this was according to the comments on a Facebook post on Shibuya Pro's Facebook page from October 2014 and a Nikkei article from August 25, 2015, both of which can be viewed in links provided in the first post of this thread). Shibuya Pro's plan is to broadcast the series worldwide. As is mentioned in their quote that you got, YJ_Doodle, it depends on the TV channel in whichever country as to when they will broadcast the series. The timing for certain countries may be later than others, since they will likely want to provide a dub in their own language, which in itself, takes time.

The date for Japan is just speculation on my part, but if France and the United States get the series in Fall 2017 as is currently projected, then I would have to imagine that Japan wouldn't be too far behind. 2018 seems like a reasonable guess as to when they'll get it.

"Rejoyce" wrote:What happens if nobody wants to run this show? Or do they already have someone who wants to show it?

I doubt that nobody will not want to run the show. I would have to imagine that at least one TV channel in the world would want to show Astro Boy Reboot.

Currently, no TV channels have been announced to the public yet, but they're probably currently in talks and negotiations with certain TV channels to run the show.
Top

I could see that. Heck, these days it would probably be the wiser choice.
The Amazing Astro Toy: The Adventures of my Astro Boy doll
Top

^Once again, Nikkei is reporting a 2018 worldwide release year for Astro Boy Reboot, starting in developed/industrialized countries, beginning with France. Shibuya Productions did say, from what they told YJ Doodle last month, that "they expect a broadcasting in 2018 for some countries," so that could mean that some countries expect a 2018 release, while others may follow in subsequent years.

As sad as it may be to say, we haven't heard an update from Shibuya last November regarding a release date, and this just came out today and had another article say the same thing last month; I'm starting to believe that 2018 may truly be the year Astro Boy Reboot will first get released in, rather than 2017. I'm going to change the year on the thread title for now.

The article also mentions that production of Astro Boy Reboot, converted to yen, is 1.1 billion. Converted to US dollars, that's about $10.13 million.

Episode length now says 30 minutes instead of 26 minutes, but that may be a rounded up number. It does still say that there will be 26 episodes though.

However, the best news in this article is that, in the summary it gives of Astro Boy Reboot, it mentions that Astro lives with the woman doctor and her daughter. My speculation is that, what that means, is that the "flower girl" in the MAGIC 2016 poster is the daughter of the woman doctor character.

EDIT: Also, if someone knows Japanese, I'd like them to translate this: 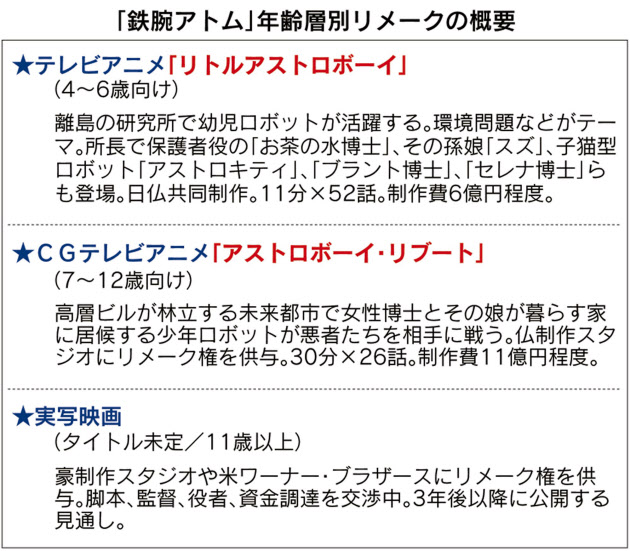 Also, I have contacted another friend of mine who lives in Japan.
Last edited by CommanderEVE on Sat May 14, 2016 11:08 am, edited 1 time in total.
Top

Well somehow it has become reality that I might have to watch ABR after Dragons 3 comes out :/

But I am sure glad there's a bit more information. As of what I've got from the Nikkei article Atom doesn't seem to be actually "adopted" but more of a "guest" but that might be translation errors. I'm pretty sure they're his family by now. We really need an actual trailer or something to get things clearer...

The article by itself is quite interesting, by the way. It talks about how Japan is dealing with a lower birthrate and deathrate(longer life spans) and how the animation industry(and the Astro Boy franchise) has been reflecting that. They keep making remakes of AB in order to keep it's popularity going throughout different generations, and also to appeal to the now grown up audiences of the old AB series. That's why they're making three at once this time- One of toddlers, one for kids, one for teens/adults.
Last edited by YJ_Doodle on Sun May 15, 2016 1:02 am, edited 3 times in total.
Top

Hm, one for teens/adults? Is that referencing the new movie?
lolwut
Top
Post Reply
688 posts