I am starting to enjoy your drawings, I like your writing style too. Look forward to seeing more.

Did some sketchy comics for the FTL Atom AU, these are from when Atom was still a college student. 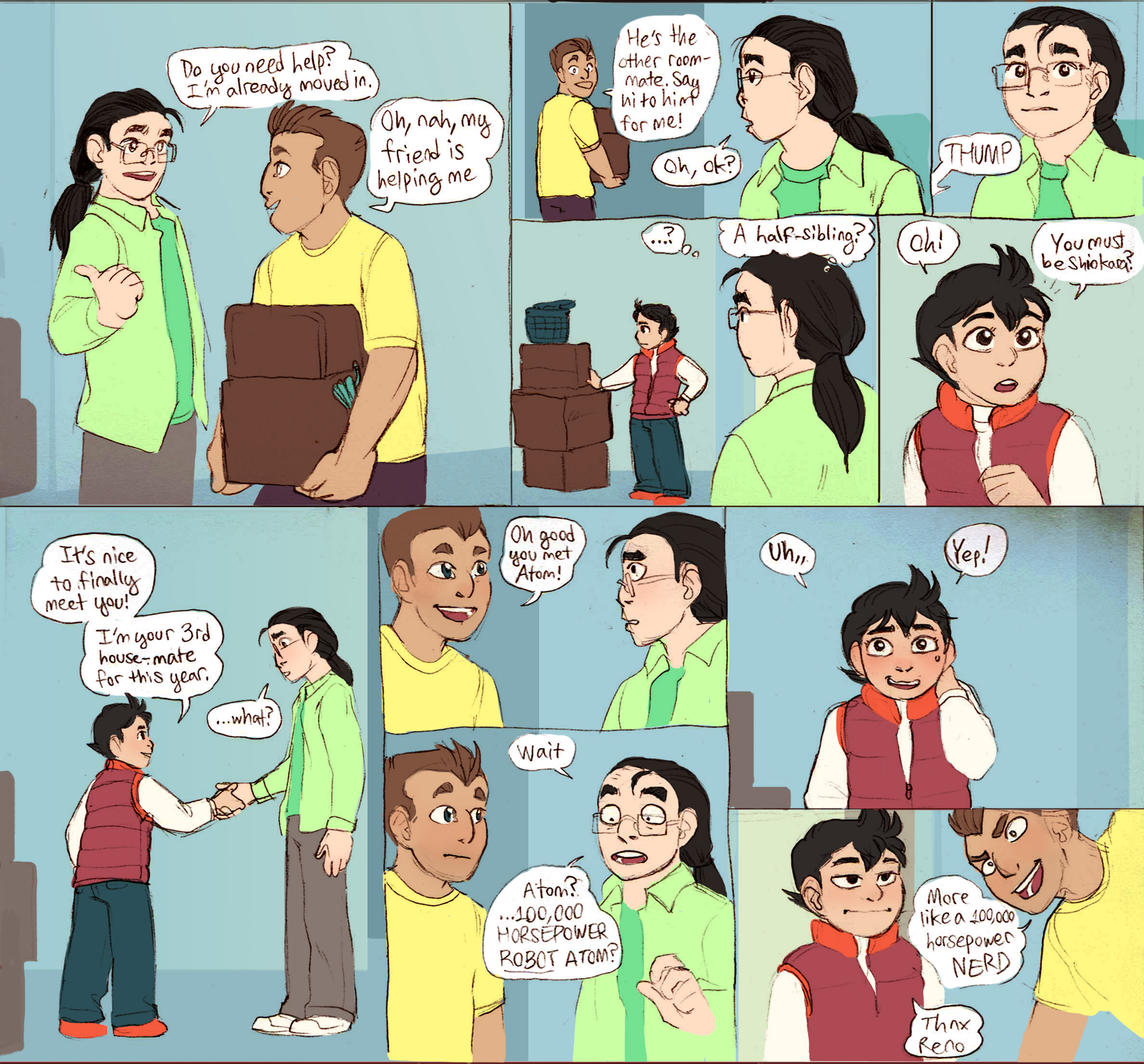 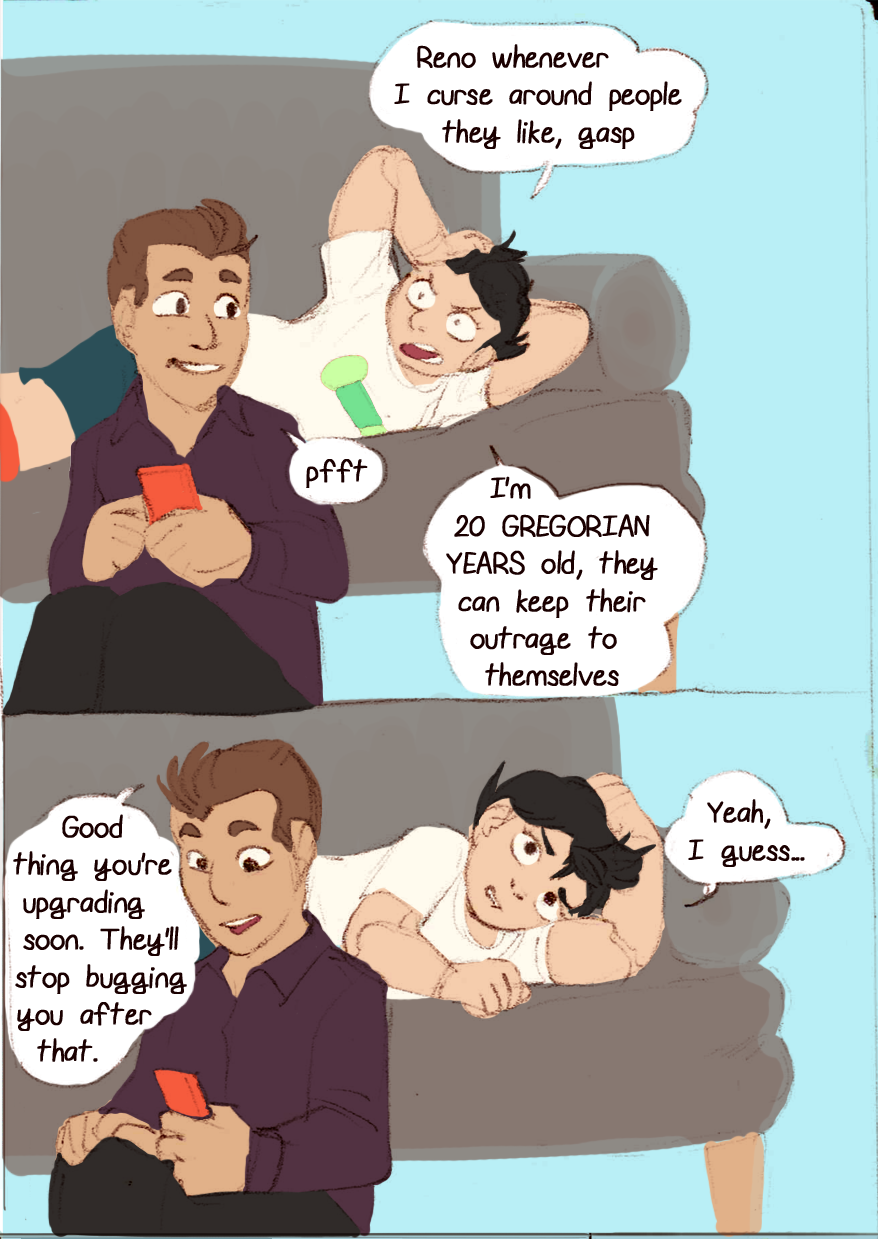 The last one always crack me up

The real sign that someone has become a fanatic is that he completely loses his sense of humor about some important facet of his life. When humor goes, it means he's lost his perspective.

This is... this is brilliant ;v; It makes me feel kinda bad about not paying attention to all of your Danny Phantom stuff that I found in the tag on Tumblr; but I have a huge problem with processing text walls and info dumps- I'm not very science-minded, I guess. It's kind of a serious hamper when it comes to learning new things, actually...

But oh my god, this is hilarious (even if I'm gonna have to look up what a "Gregorian year" is). By the by, does Cobalt exist somewhere in this AU? I'd imagine not, since he doesn't actually show up much in media anymore, and was even a little bit scarce in the 60's, when he was actually somewhat relevant. (Actually I can't remember what year he first appeared in the manga was?? All I remember was that it was July, and that it was the Year of the Horse at the time...)

I am now tempted to plumb the depths of the AB tag on Tumblr, something I have not done in a very long time, not since I lost most of my interest in the series and fandom in general. (Who knows; I may even drop a follow for this relatively obscure interest of mine- and maybe the DP stuff, just a little bit- alone...)
lolwut
Top

I'm glad you're enjoying my work! Don't worry too much about reading my info dumps, I don't expect everyone to do it... that's the reason I draw so many diagrams and comics, they're easier to digest. Ironically, I actually have ADHD and reading long blocks of text can be impossible for me sometimes, so I copy-paste a lot of stuff into a text-to-speech program and listen to it instead.

Cobalt doesn't exist in this AU, nor do Astro's robot parents. Although I didn't make it a specific canon it's most closely based off the 2003 anime (hence Reno's presence).
tumblr@jayrockin·····twitter@jayrock5858
Top

Who all IS in it, tho?
lolwut
Top

@Little Brown Fox Off the top of my head, there's Tenma, Hoshie, Uran, Reno, Atom's old schoolmates, several OCs, Ochanomizu (although he passed away during Atom's college years), and probably several old villain characters (but they're not really the focus here).

Hoshie is alive and divorced to Tenma, but she has a weird distant relationship with Atom. She never really learned to cope with his resemblance to Tobio despite being a different person, and sees him as painful reminder of her son's death and ex-husband's terrible behavior. Atom also has most of Tobio's memories in this AU, thanks to Tenma running off with Tobio's dead body to the Ministry and copying some of his son's brain into digital data before the cells degraded too much to scan. Fun stuff! It's a little more plausible than getting human memories from DNA, though (glares at the 2009 movie). Atom has had difficulty coping with these glitchy human memories in the past, but currently rationalizes them as Tobio's memories and not his own. I'm also not sure how close Atom is with his elementary school mates anymore, as it has been Quite A While...

On a lighter note, I have more comics and scribbles to dump oops I polished off another one tonight while I was at it. Sorry for the horrid image compression, my scanner is Bad At Pencils.

This one's a bit sappy, but in my favorite bizarre transhumanist way